Can You Spot Ileana D'Cruz In Her Throwback Pic? We Are Confused 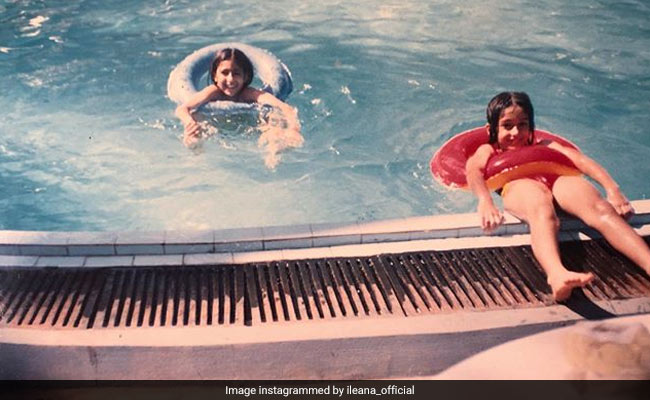 Ileana D'Cruz struck gold in her photo archive on Tuesday night and the Rustom actress delighted her fans by sharing a throwback picture on her Instagram profile. In the photo, two little girls can be seen having a good time in a pool. However, it is difficult for us to identify which one is the younger Ileana in the photo, on which she even asked her fans to spot her. Sharing the photo, Ileana wrote: "Major throwback alert. Spot the weirdo." Mother-to-be Ileana D'Cruz frequently posts love-filled photos with her boyfriend Andrew Kneebone on Instagram. But first, take a look at her recent post:

Previously, Ileana shared several photos with her boyfriend on social media and in some of her posts, she even called him "hubby". However, the actress never shared any news about her wedding with Australian photographer Andrew Kneebone.

Meanwhile, take a look at Ileana D'Cruz's other posts:

You make me happy every time you smile @raammie @jeromecole

He continues to amaze me... Warning major hubby boasting coming up - So he was up all night attacking a fire in Victoria last night for 16 hours straight..i saw the pictures of the fire and it was terrifying and absolutely massive...it was insanely gruelling and he must have been exhausted and should have looked it as well... This is what he looked like - so BLOODY GOOD! Also being an extremely paranoid other half i asked him to message me letting me know he's ok whenever he could me... ..and he did Through my tears and paranoia of him being in the middle of this extreme situation, I just have to say I'm so so proud of my man. . P.S. Stibbers if you're reading this thank you so goddamned much for these pictures of him!!! I owe you big big hugs

Find someone who makes you laugh, even when you don't want to

Ileana D'Cruz, who made her Bollywood debut with Ranbir Kapoor's Barfi! in 2012, had worked in films such as Phata Poster Nikla Hero, Happy Ending, Rustom, Baadshaho and Raid.

Ileana D'Cruz was last seen in 2018 Telugu action film Amar Akbar Anthony. Over the reports of her quitting the Telugu film industry, Ileana said that she won't give up the industry which has given her the identity. In an interview with IANS, she said: "After I signed Barfi!, I was shocked to read reports that I have quit Telugu cinema for Bollywood. These were baseless allegations... Why will I give up an industry which has given me an identity."