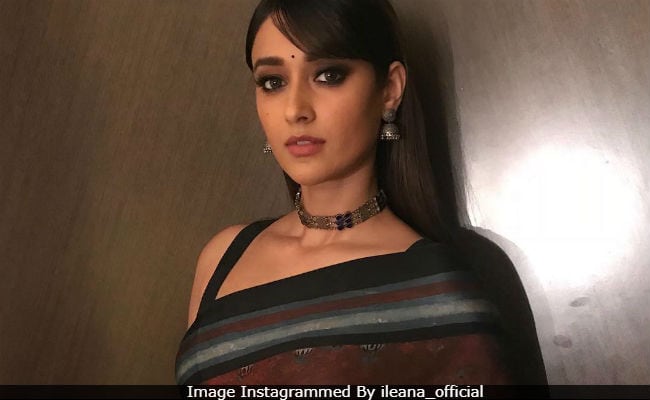 Actress Ileana D'Cruz, who has made a comeback to the Telugu industry after six years with the forthcoming film Amar Akbar Anthony, says she never quit her career in the south to build one in Bollywood. In a group interaction, she told IANS that it wasn't a conscious decision to move away from Telugu filmdom. "People have always had misconceptions about my career. After I signed Barfi!, I was shocked to read reports that I have quit Telugu cinema for Bollywood. These were baseless allegations and it's time to put them to rest. Why will I give up an industry which has given me an identity," Ileana asked.

In 2012, she made her Bollywood debut with Ranbir Kapoor's Barfi!, which was followed by films such as Phata Poster Nikla Hero, Happy Ending, Rustom, Baadshaho and Raid.

"When I was shooting for Julayi, I got an offer to work in Barfi!. It was a project with an interesting story and I didn't want to miss. I even consulted exploring the opportunity with director Trivikram and he was very happy for me. Even without knowing anything about my role, he pushed me to accept the offer," she said, adding she got so busy in Bollywood post Barfi!, she had to miss out on several Telugu offers.

"It's just that I was getting really good work in Bollywood that I didn't have time for Telugu films. Also, after a point I was being approached for dance numbers by Telugu filmmakers and I was not excited about these offers. Therefore, I waited for the right film to return and that's how 'Amar Akbar Anthony' happened," she clarified.

In Sreenu Vaitla-directed Amar Akbar Anthony, Ileana has teamed up with Ravi Teja for the fourth time.

Talking about the project, she said: "There couldn't have been a better Telugu film to make a comeback. It has all the ingredients to be your regular commercial potboiler and has a wonderful story. For the first time, I've played a complex role with many layers. I've also dubbed in my own voice in Telugu."

Ileana says she wants to do films that will be remembered for a long time.

"I started my career when I was 20 and over the years have done all kinds of films. Now I'm 32, and there is remarkable change in my thought process and personality. I have been making some sensible choices and I want it to reflect in the films I do. I want to be part of films that will be remembered for a long time," she said.

As the conversation veered towards her personal life and relationship status, she said she's in a happy space.

"I have evolved as a person and I'm neither pregnant nor married. After coping with depression, I have become mentally strong. My working relationship with people has also changed for good. I know I'm happy with my relationship status and I'd like to keep it that way," she added.

Asked to comment on the #MeToo movement and how it has gained momentum, she said that it's time to break the silence.

"I am glad women are opening up even though we know it's very scary. Small things can make a lot of difference and this is a good start," she said, refusing to talk about her personal experiences. "It's best if we don't go there. When I want to talk about it, I will."