Can You Name The "OG Posers Of The Kapoor Family" In This Throwback? Alia Bhatt Spotted Ranbir 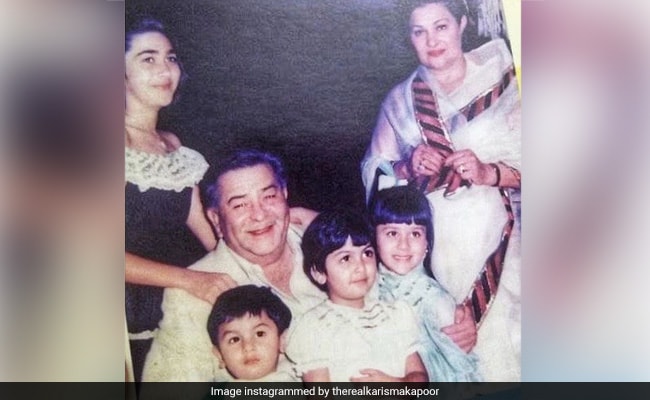 This Flashback Friday, we got a throwback treat from Karisma Kapoor. Unable to travel anywhere else during the lockdown, Karisma took a trip down memory lane and came back with a fabulous blast from the past. "Family matters," Karisma captioned the blast from the past. The Kapoor kids pose with their grandfather Raj Kapoor while his wife Krishna Raj Kapoor also features in the photo. How adorable is Kareena - that's her on Raj Kapoor's left. And that's Ranbir on the other side with Riddhima in between. Ranbir, why so serious? Meanwhile, Kareena, who recently joined Instagram, described the photo in her own words: "We've discovered the OG posers of the Kapoor family."

We've discovered the OG posers of the Kapoor family.

Meanwhile, Alia has already identified who's who and posted a comment for her boyfriend. She shared the heart icons in the comments section on Karisma's post. 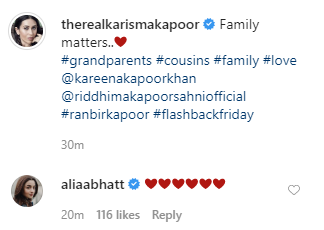 TBH, Karisma's feed is a khazaana on throwback photos featuring herself and Kareena. On Kareena's birthday once, Karisma shared an eighties' throwback photo featuring the Kapoor sisters as major "fashionistas". In another birthday greeting, she shared another glimpse of Kareena's baby days.

On regular days, the Kapoor cousins are often spotted hanging out together in and about Mumbai. During the lockdown, they are catching up with each other on social media. Kareena recently made her Instagram debut but she's known to have had a secret Instagram profile from much before. Ranbir Kapoor doesn't have an official Instagram account yet but reportedly operates from an anonymous account.