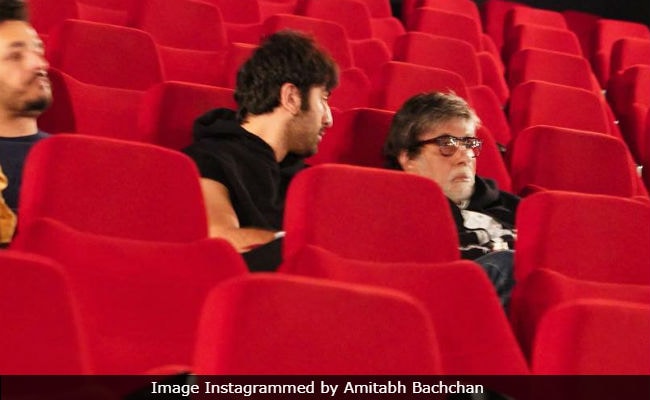 Amitabh Bachchan and Ranbir Kapoor are giving us major friendship goals (again). Seems like Big B (75) and Ranbir's (35) bonding is not merely confined to selfies after all as the Brahmastra co-stars were seen bonding over movies. On Thursday, Mr Bachchan shared a picture on his Instagram, in which the duo can be seen watching a movie. Going by Mr Bachchan's caption, seems like the actors were watching Tom Cruise's Mission: Impossible - Fallout. Mr Bachchan wrote: "At the movies ... Ranbir and I for impossible Mr Tom Cruise." The picture received over 1 lakh likes within a few hours and several comments such as "legends watching another legend" and "you two are giving us goals" were seen on the post.

At the movies .. Ranbir and I for IMPOSSIBLE Mr Tom Cruise

Big B also shared another picture, in which he can be seen having a conversation with Brahmastra producer Karan Johar. Mr Bachchan wrote: "#hypebeasts... learnt this from the daughter and granddaughter... Karan and I , Sofia and Brahmastra."

#hypebeasts .. learnt this from the daughter and grand daughter.. KARAN and I , Sofia and BRAHMASTRA

Brahmastra is the first film in which the duo will be seen sharing screen space. The film also features Alia Bhatt, TV actress Mouni Roy and veteran actors Akkineni Nagarjuna and Dimple Kapadia. Directed by Ayan Mukerji, Brahmastra is a fantasy trilogy that is scheduled to release in 2019.