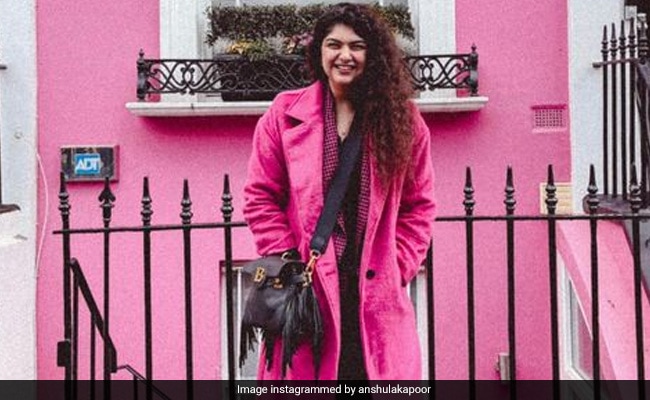 Anshula Kapoor, who is currently holidaying in London, has been sharing many pictures and videos from her vacation on her Instagram handle. On Friday, Anshula shared two pictures of herself on her Instagram. In the pictures, she can be seen sporting a long pink jacket. Sharing the pictures, Anshula wrote, "I mean I just had to na!" with a red heart. Her caption was accompanied by the hashtags Pink On Pink On Pink, Can You Guess My Fav Colour Yet, Rooh Afza Got Nothing On Me."

Anshula's post caught the attention of her father Boney Kapoor, who thinks her daughter's post is beyond wow. He wrote, "Wow se bhi upper," with fire emojis. In another comment, he dropped raising hands, hearts and kissing emojis.

Anshula's half-sister Janhvi Kapoor too commented on her post. She wrote, "Ur looking like a cutie cupcake!"

Anshula's uncle Anil Kapoor and aunt Maheep Kapoor too reacted to her post. Both of them dropped red hearts on her post.

Karisma Kapoor too dropped a sparkling heart on Anshula's latest post from London.

Anshula posted a few more pictures and videos from her London vacation.