It's A "Task" For The Kapoor's To Take A Pic "Properly." See Rhea Kapoor's ROFL Post A still from the video. (courtesy: rheakapoor)

Do you think it is easy peasy to get the Kapoors to take a family photo “properly”? You are wrong, my friend. The celebrations for Nirmal Kapoor's 88th birthday on Tuesday night proved that it is “impossible” for the family members to pose calmly for a group photo even for a few seconds. Ask Rhea Kapoor, she agrees. The producer has posted a time-lapse video on Instagram today to show that it is always “chaos” when the Kapoors get together. In the video, Nirmal Kapoor is seen sitting on a chair with a birthday cake kept in front of her on a table. Anil Kapoor and his wife Sunita, Sanjay Kapoor and his wife Maheep and their children Shanaya and Jahaan are seen having a whole lot of fun. We can also spot Boney Kapoor and his daughter Khushi. Also present at the get-together were Rhea Kapoor's husband Karan Boolani, Mohit Marwah and his wife Antara.

Sharing the clip, Rhea Kapoor added a ROFL caption to her post. It read, “For being in front of the camera so much, it's impossible to get this family to take a picture properly.” She also wished her grandmother in a simple yet sweet way, “Happy 88, Dadi,” and added, “Missing Sonam Kapoor, Arjun Kapoor, Anand Ahuja and Janhvi Kapoor." Well, the other Kapoors happily agreed that it is, indeed, a task to get all of them to pose for a proper family photo. Maheep Kapoor commented: “Chaos always (laughing and heart icons)... love it.” Her daughter Shanaya said, “Chaos.” As per Antara Marwah, “This was a task.” Sanjay Kapoor loved the clip and wrote, “Too cool.”

We also loved the family photos shared by Anshula Kapoor: 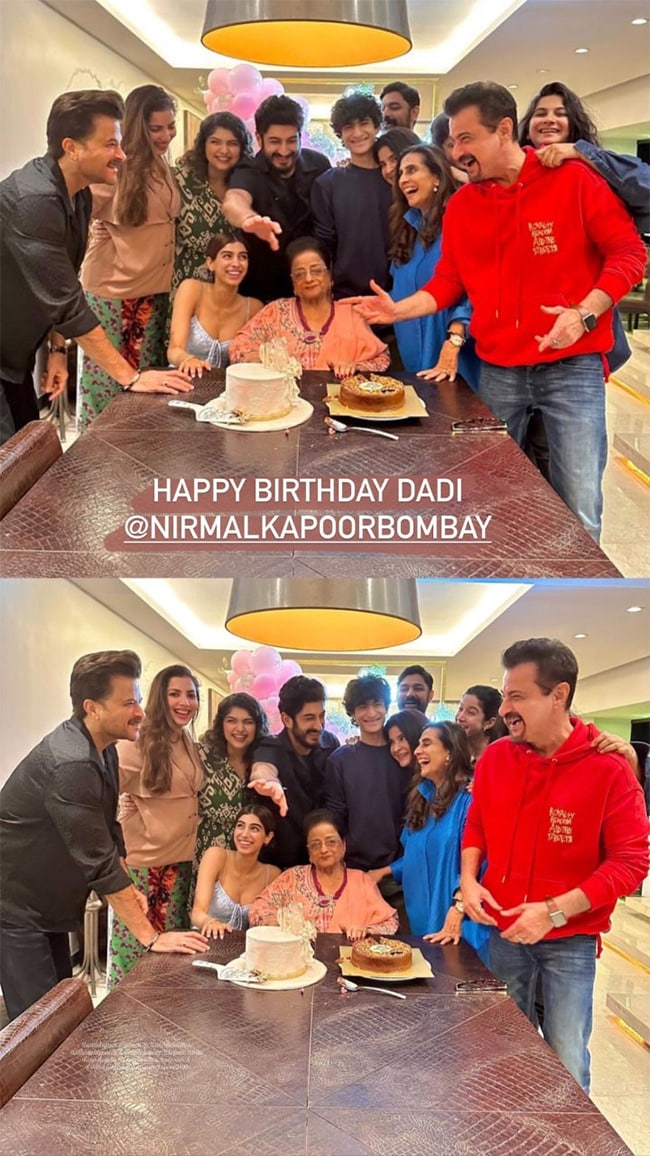 So, which one of these photos did you like the most? Tell us in the comments section.