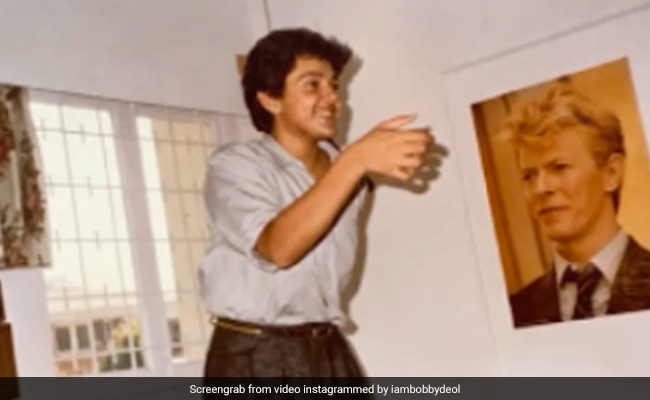 Bobby Deol, who loves to share throwbacks on his Instagram profile, added another one to his collection on Thursday night. The actor's post happens to be a throwback from his childhood days, in which he can be seen dancing to David Bowie's peppy track Let's Dance. Bobby Deol can be seen dressed in a tucked in blue shirt and a pair of black pants. He can be seen flashing an ear-to-ear grin in the post. He captioned the post "Let's Dance" and added the hashtags #ThrowbackThursday, #DavidBowie, #ReelsInstagram and #ReelsIndia. The comments section of his post was filled up with heart emojis from his Instafam and friends.

On Father's Day last month, Bobby Deol shared a super cute throwback with his dad Dharmendra. "I will always be your little boy! Love you papa. Happy Father's Day! #FathersDay #FatherAndSon," he wrote. "Love you Bob," Dharmendra commented on the post.

The actor, who made his Bollywood debut with the 1995 film Barsaat, in the recent years has starred in projects like Race 3, Housefull 3 and Housefull 4, Netflix's Class Of '83 and the web-series Aashram.

Bobby Deol has a super busy schedule ahead. The actor's upcoming projects are Penthouse and Love Hostel. He will also co-star with Ranbir Kapoor, Anil Kapoor and Parineeti Chopra in Sandeep Reddy Vanga's Animal. He will also feature in the second installment of the 2007 film Apne with his dad Dharmendra and brother Sunny Deol. The film will also star Sunny's son Karan Deol.