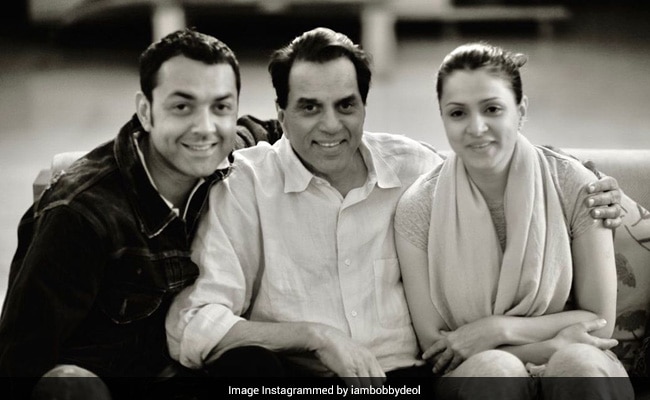 Bobby Deol treated his fans to an adorable family photo featuring his dad, actor Dharmendra, and wife Tanya on Thursday. The Badal actor flipped through his family album and picked a rare photo of his father and his wife to share on his Instagram profile. In the picture, Dharmendra can be seen sitting in the middle of Bobby Deol and Tanya on what appears to be a couch while happily posing for the camera. Sharing the picture, Bobby Deol wrote nothing and just accompanied it with a red heart icon. Because, no caption needed. Take a look at his post:

Last month, Bobby Deol and Tanya celebrated their 25th anniversary. On the occasion, the actor posted priceless throwback pictures of himself and his wife and he wrote: "My heart, my soul. you mean the world to me. love you forever and ever. happy 25th anniversary."

Bobby Deol has featured in films like Badal, Barsaat, Ajnabee, Soldier, Apne and Tango Charlie, to name a few. Bobby Deol was last seen in web-series Aashram: Chapter 2, which is directed by Prakash Jha. His film Class Of '83 also released on Netflix last year.

Dharmendra has starred in hits like Sholay, Phool Aur Patthar, Kaajal, Dharm Aur Qanoon, Bhagawat and Charas. His son Sunny Deol is best-known for his performances in Gadar: Ek Prem Katha and Ghayal.