Plus, Drake gave a shout-out to Game Of Thrones 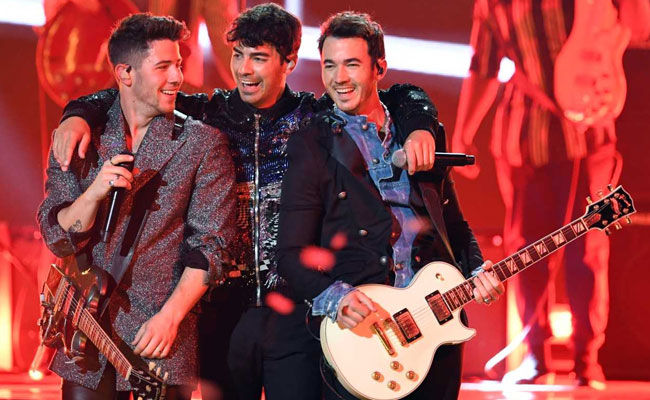 NBC's Billboard Music Awards telecast Wednesday night was three hours long, but one of the most viral moments happened in the last five minutes. In the middle of a (truly incredible) medley of her greatest hits, Paula Abdul danced down the aisle to Straight Up and tossed her hat into the crowd - only she threw it directly at Dancing With the Stars judge Julianne Hough's neck.

Anyway! There were many other highlights from the show hosted by Kelly Clarkson; a complete list of nominees and winners is below. Here's a rundown of 10 things you missed:

Drake is now the most-awarded artist in Billboard Music Award history, as he picked up 12 more trophies Wednesday. He accepted two onstage, including Top Billboard 200 Album for Scorpion, and his speech concluded with a reference to Game of Thrones: "Hey, shout-out to Arya Stark for putting in that work last week," he said, as he walked away laughing. This led to social media panicking over Arya's fate because of the very real "Drake curse."

Speaking of speeches, Carey was emotional as she accepted the Billboard Icon Award. The superstar, who holds the record for the most No. 1 hits on the Billboard Top 100 by a solo artist, also performed a medley of hits, including A No No, Always Be My Baby, Emotions, We Belong Together and Hero. Her 8-year-old twins were in the audience and truly seemed psyched to be there.

"Icon? I really don't think of myself in that way. I started making music out of a necessity to survive and to express myself, and I just wanted to create something so I could feel worthy of existing," Carey said. "Without getting into all the drama, all the ups and downs of my career ... we all make mistakes. There's been a few memes. I guess I've always felt like an outsider, someone who doesn't quite belong anywhere; and I still feel like that lost, interracial child who had a lot of nerve to believe I could succeed at anything at all in this world. But, and this is the truth, I did believe because I had to. The truth is I've dedicated my life to my music, my saving grace, and to my fans who are unlike any other entity that I've ever known."

After a wildly intricate countdown, Taylor Swift dropped her new single ME! last week, a pastel-splashed, bouyant track featuring Panic! At the Disco's Brendon Urie. Their television debut included a pink drumline (which immediately sparked comparisons to Beyonce's dancers with briefcases from the music video; and people floating down from the ceiling with umbrellas.

Any attempt to describe the K-pop phenom's collaboration of Boy With Luv with Halsey would make us sound extremely old, so just know that the mere mention of BTS (who won Top Duo/Group) throughout the show made the audience erupt in ear-piercing screams - so just imagine what the actual performance sounded like.

Madonna reportedly spent quite a bit of money spicing up her performance of Medellin (her duet with Maluma) with holograms - oh yes, there were many holograms. All replicas of Madonna, dressed in different costumes she wore in the music video, including a bride in a cowboy hat. Honestly, you just have to see it:

Cardi B is always entertaining when she gets to the microphone, and the Billboard Music Awards were no exception, as she took the stage solo to accept the trophy for Top Hot 100 Song for her hit with Maroon 5, Girls Like You.

"I remember when Maroon 5 hit me up to do this song. I was like, 'Bro, I'm five months pregnant. I can't even breathe!' " she said. "But this record to me was so amazing. I was like, 'Oh, oh, this is going to be a hit.' And now I sing this song to my daughter because she's the girl that I need."

After she won Top Rap Song for I Like It, Cardi B urged everyone to support their favorite artists by streaming their music, but had to quiet some adoring fans who were a bit too loud: "Let me finish my speech. ... I know you love me!"

Abdul started her unbelievably mesmerizing medley with some tap dancing, and as she ran through some of her biggest songs - Straight Up, (It's Just) The Way That You Love Me, Vibeology, Opposites Attract, Cold Hearted, Forever Your Girl - she also displayed some tremendous dance skills and flew off a platform. MC Skat Kat obviously made a cameo.

Ciara also displayed stellar choreography with Thinkin Bout You, as she danced into the audience and then back onstage with equally skilled backup dancers in some very shiny red leather gloves.

The JoBros incorporated a couple solo hits into their first televised performance together in more than a decade: Nick started with Jealous, and then joined Joe for DNCE's Cake By the Ocean. Then Kevin appeared, as the trio all came together for "Sucker," their new single that recently topped the Billboard chart. (Of course, Nick stopped mid-song to kiss his wife, Priyanka Chopra, in the audience.)

Because it's not an award show without Grande, she was beamed in from an undisclosed tour stop with a performance of 7 Rings, her current smash.

Panic! At the Disco

Panic! At the Disco

I Like It, Cardi B, Bad Bunny and J Balvin - winner

In My Feelings, Drake

She Got the Best of Me, Luke Combs

Sit Next to Me, Foster the People

Whatever It Takes, Imagine Dragons

"I Like It," Cardi B, Bad Bunny and J Balvin