Game of Thrones 8 : The True Hero Emerges At The Battle Of Winterfell

After Sunday night's episode, Arya Stark is the queen of Westeros 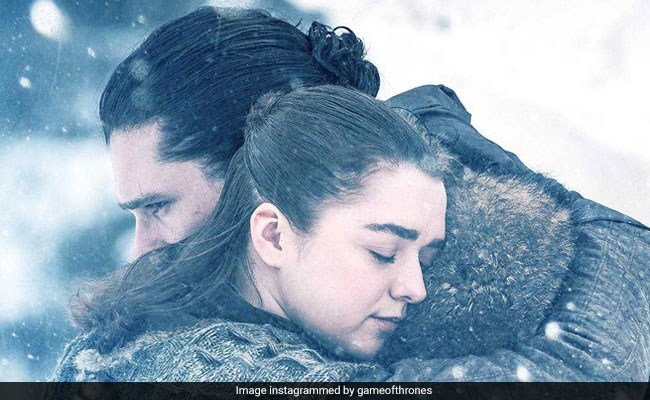 A still from Game Of Thrones 8. (Image courtesy: gameofthrones)

This post contains a multitude of spoilers for all seasons of Game of Thrones. Otherwise it would be very short.

Sure, Cersei Lannister might sit on the Iron Throne, and Daenerys Targaryen may have a solid claim to it, but make no mistake: After Sunday night's episode, Arya Stark is the queen of Westeros. At least, symbolically speaking.

For those who somehow don't know and have decided to read this spoiler-filled post anyhow, the great Battle of Winterfell between the living and the army of the dead ended with Arya killing the Night King in one of the most breathtaking action sequences put on the small screen. There's an adage about storytelling that a twist should be utterly shocking while feeling inevitable. And the conclusion to the great battle - and, thus, the conclusion to the army of the undead - fulfilled that adage perfectly.

Because while the scene was shocking in the moment, the show has left a trail of clues for us to follow ever since the first episode.

From the pilot, Arya is presented as Winterfell's resident tomboy, more interested in weaponry and combat than in any palace intrigue. While her older sister, Sansa, dreams of being a princess and wearing ornate gowns (a dream crushed out of her by years of horrors), Arya is busy disrupting the archery practice of a then-uninjured Bran. While the boy can't hit a thing, Arya surprises everyone by nailing a perfect bull's eye.

We know the story from there - she demands combat lessons, and her father hires master swordsman Syrio Forel to train her. Not only does he instruct her in how to fight, he teaches her a neat little phrase with which to greet death, one that ends up proving pretty important during the battle against the Night King's forces: "Not today."

Once Arya starts training to be a faceless assassin at the House of Black and White, it becomes pretty obvious that she's going to play a major role in the endgame. Once she begins taking her revenge by working down her kill list, it seems downright inevitable.

But little moments of foreshadowing have been quietly gifted to us throughout the series, ones that ranged from seeming utterly meaningless to being conspicuous signposts of something to come - even if we didn't know what.

First, there's Arya's abiding obsession with Valyrian Steel. As early as Season 2, Arya is reminding Tywin Lannister that Aegon Targaryen conquered the land not just with dragons but with his sisters, one who wielded a Valyrian Steel sword named Dark Sister. Her interest in the material, which can be used to kill the undead, is rewarded when Bran gifts her Chekhov's Valyrian Steel dagger.

Second, there's simply how much time she spent at the House of Black and White, a story line that incited a collective, two-season-long groan from many (if not most) fans of the show. The general reaction to her training was who cares? Well, a lot of folks are scraping egg off their faces today. It became clear when she was stealthily hopping around the castle and silently avoiding wights that those seasons were packed with purpose, even if they weren't always fun to watch.

Finally, there's the conversation Arya has with Melisandre, the Red Woman, when she encounters her in Season 3. Rather than responding to Ayra's shouts of "You're a witch," the Red Woman looks at her and says, "I see a darkness in you. And in that darkness, eyes staring back at me. Brown eyes, blue eyes, green eyes. Eyes sealed shut forever. We will meet again."

Hmmm, could that refer to the fact that Arya eventually is able to change her eye color (thanks House of Black and White) and seals the Night King's eyes forever? You betcha. Nothing on this show is accidental.

And, of course, they do meet again - at the Battle of Winterfell, where the Red Woman references Syrio Forel's mantra to persuade Arya to go after the Night King.

It's a nuanced and patient bit of storytelling, one that has paid off in dividends. There's arguably no character as well-developed as Arya, and unlike some other characters on the show, her story arc actually feels earned. So it's particularly exciting that there's (probably) going to be much more to it.

We know Arya has a kill list, but it still felt a little ridiculous when she told Ed Sheeran and his band of sad singing soldiers that she was headed to King's Landing to kill the queen in Season 7.

It doesn't feel so ridiculous now. While Cersei might not be as easily fooled as the Night King (seriously, he didn't see that hand-switch trick coming?), she's only human - and so is her army. And at this point, humans don't seem like much of an issue for Arya.

Game of Thronesarya stark game of thronesGame Of Thrones 8