Raqesh Bapat tells Shamita Shetty to watch her tone while speaking to him. 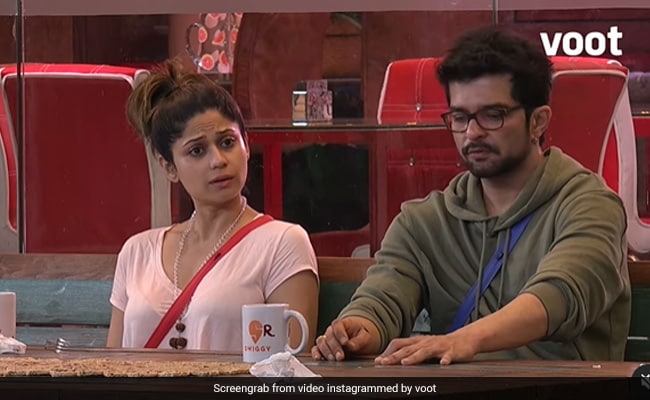 Shamita Shetty's Bigg Boss OTT journey has been far from smooth. The actress has been getting into a series of arguments with fellow contestants in the past few days. After Shamita Shetty was called “ghamandi” (arrogant) and “dominating” on the Sunday Ka Vaar episode by housemate Nishant Bhat, the actress received a similar response from her erstwhile “connection” Raqesh Bapat. As per a video released by Voot on Instagram, the duo is having a calm conversation, which then transforms into an argument. This raised eyebrows given that both Raqesh and Shamita have confessed to having feelings for each other on the show.

In the clip, Raqesh Bapat is seen telling Shamita Shetty that he thinks that he has gained the trust of Divya Agarwal and Nishant Bhat. To this, Shamita says that it is wrong to even consider trusting Divya and advises him against it. This, however, does not sit right with Raqesh who says, “You don't have to react this way all the time.” He also tells Shamita that she often ends up “demeaning” his thoughts. Well, Shamita does not agree with this. An exasperated Raqesh then says, “You are, watch your tone of voice when you are talking to me.”

Later, Raqesh Bapat explains, “Main kuch bolta hoon (Whenever I say something), suddenly you start negating it. I don't like that.” To this, Shamita Shetty tells Raqesh that he is free to choose Divya Agarwal as his connection. “This is what I am talking about, domination. The tone you talk to me, I don't like it. You are demeaning me a lot these days,” he adds.

Raqesh Bapat's comments come just days after Shamita Shetty was accused of dominating him by housemate Nishant Bhat. Nishant also referred to Shamita as "ghamandi" and calls her an “ice-queen” in a video shared by Voot. To this, Shamita chastises Raqesh for not standing up for her. “He [Nishant] keeps saying I am dominating you [Raqesh] and you keep quiet,” an angry Shamita tells Raqesh. But Raqesh explains to Shamita that Nishant and she should solve the issue between them like mature adults.

Given that Bigg Boss OTT contestants will now have to play as individuals, all eyes are on Shamita Shetty and Raqesh Bapat and their ever-evolving relationship.