In the task, Bigg Boss OTT contestants were asked to come in pairs and name housemates who they don’t see going far in the competition. 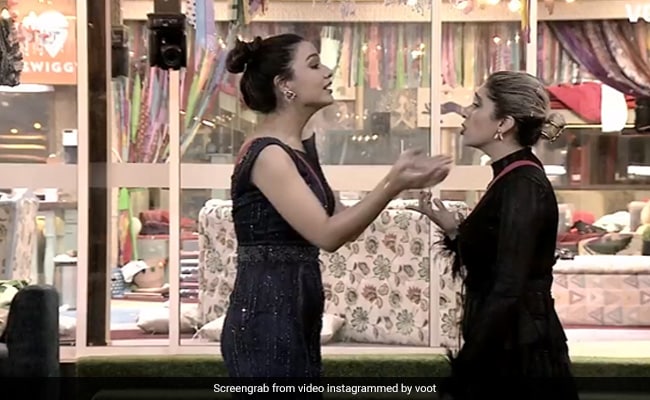 Bigg Boss OTT: Divya Agarwal, Neha Bhasin in a still from the show

The Bigg Boss house is no stranger to ugly fights. However, on most weekends when the contestants are in front of the host and special guests, they tend to mend their ways. But in the first season of Bigg Boss OTT, contestants seem to be in no mood to rein in their temper. A case in point is an argument that broke out between Neha Bhasin and Divya Agarwal during a task conducted on the weekend. Bigg Boss 14 winner Rubina Dilaik was also present in the house with one of BB14 finalists, Nikki Tamboli, at the time of the fight.

In the task, Bigg Boss OTT contestants were asked to come in pairs and name housemates who they don't see going far in the competition. When Divya Agarwal and Neha Bhasin stood up for their turn, they were asked to choose between Shamita Shetty and Raqesh Bapat. Since the task required them to arrive at one name unanimously, Divya and Neha had a tough time.

While Divya Agarwal felt that Shamita Shetty was not deserving, Neha Bhasin picked Raqesh Bapat as the weaker of the two. During the course of their discussion, Divya says that while Shamita and Neha both claim to propagate gender equality, the words they use in the Bigg Boss house show otherwise.

In reaction to this, Neha Bhasin pretends to sleep, much to Divya Agarwal's chagrin. Divya says, “Have some respect when somebody is speaking.” To which, Neha replies that she is not interested in what Divya has to say.

This sets off an argument between the two. Neha Bhasin even tells Divya Agarwal, “Don't speak like a kabadiwala and in kabadi language.” To this, Divya reacts immediately and asks Neha, “What's wrong with a kabadiwala and their language?”

Following this, Neha Bhasin goes on to call Divya Agarwal a “rotten woman.” Things take a turn for the worse when Divya attempts to calm Neha down by holding her by the shoulder. Divya explains to Neha that they need to complete the task and cannot argue in front of guests. This upsets Neha even further, prompting Shamita Shetty and Pratik Sehajpal, Neha's connection, to walk up to the singer and calm her down.

In a clip shared by Voot on Instagram, you can catch a glimpse of the two as they begin to argue with one another.

Viewers will have to wait till the weekend to know if host Karan Johar and the audience will pull up the duo for their unruly behaviour.