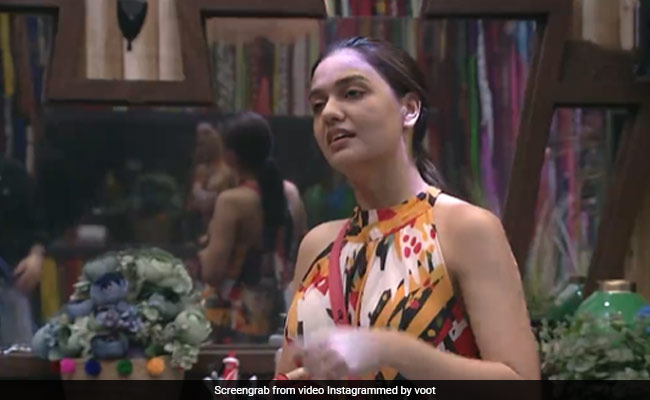 Divya Agarwal in a still from the video.(courtesy voot)

Divya Agarwal and Pratik Sehajpal's fights are becoming the hot topic on Bigg Boss OTT. From sarcastic comments to hurling abuses, the two share a bitterness that nobody has been able to solve. The first instance of a conflict arose when Divya and Pratik were introduced to each other on the stage. Their fights have continued inside the house ever since. In an early episode, Divya disclosed that despite not being in touch with each other for long, she had messaged Pratik to warm up as Bigg Boss OTT co-contestant. However, Pratik did not respond.

And, their latest fight grew to be unexpectedly funny. In the latest video shared by Voot on Instagram, Pratik Sehajpal is seen bossing around the place when Divya Agarwal laughs at him and taunts him for behaving like a captain. She also said that he is behaving as bossy as a class monitor. While Divya continues to laugh at him, Pratik sarcastically calls her the principal. But Divya's laugh won't stop. Have a look:

Earlier during a fight, Pratik Sehajpal pointed fingers at Divya Agarwal and said, "Izzat se baat kar [Speak to me with respect]." To this, Divya scoffed and said, "Phir aa gaya footage lene [He's back to get more footage]." Divya also told Pratik that he was on the show because he needed it to save his downhill career whereas Divya was here because she likes Bigg Boss.

In the third episode of Bigg Boss OTT, Divya Agarwal and Pratik Sehajpal got into a tussle over the food being cooked by her team. Divya asked Pratik to be sensible and mature. Later, Divya called him a "ganda keeda [dirty pest]."

Once, as they fought, Pratik Sehajpal clapped and told Divya Agarwal, "Selected, selected" as if she was giving an audition. Divya replied by saying she has been in the industry for a longer time than him.

Bigg Boss OTT being aired on Voot is a spinoff from the original TV show Bigg Boss. The OTT series is hosted by film director Karan Johar.