Bigg Boss 15: Jay Bhanushali Teased Shamita Shetty With Raqesh Bapat's Name. Here's What She Did Next 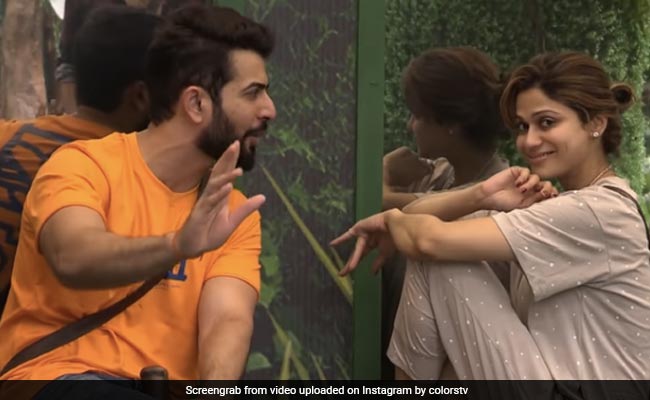 The latest season of the reality show Bigg Boss may have just begun but there is enough drama and fun to keep viewers hooked from the get-go. As contestants are getting used to their new house on Bigg Boss 15, squabbles and conversations from the latest episode are already going viral on social media. One such video shows contestants teasing Shamita Shetty about her relationship with Raqesh Bapat. Shamita and Raqesh grew close as contestants on Bigg Boss OTT, a spin-off of the Bigg Boss series. Their “more than good friends” tag led to Shamita Shetty being teased by housemate Jay Bhanushali in the latest episode.

In a video doing the rounds on social media, contestants including Shamita Shetty, Jay Bhanushali, Tejasswi Prakash, Sahil Shroff, Umar Riaz, Vidhi Pandya, and Donal Bisht are seen sitting with each other, chatting. In the course of the conversation, Jay Bhanushali teaches Shamita Shetty to say a line in Marathi. On his instruction, Shamita Shetty says, “Aaho aika na [Hey, listen please)]” as the contestants cheer her on. Shamita then wonders aloud the things the show has made her do.

The conversation continues with Tejasswi Prakash asking Shamita Shetty to make poha the next day, to which she agrees. Further, Jay Bhanushali calls the actress “Shamita Shetty Bapat”, adding that the name has a nice ring to it. A blushing Shamita Shetty asks him what he will take to keep quiet. She even picks up a club lying next to her and chases him around for fun. Jay continues to tease Shamita Shetty, telling her that her cheeks have turned red from all the blushing.

A snippet of the incident was shared on Shamita Shetty's Instagram timeline with a caption in Marathi that translates to “Have you heard?”

While Shamita Shetty and Raqesh Bapat have said that they are not dating, they have confirmed that they share a special bond. The two appeared as each other's “connection” for a large part of the show.