Bigg Boss 14: Eijaz Khan and Jaan Kumar Sanu got into a fight 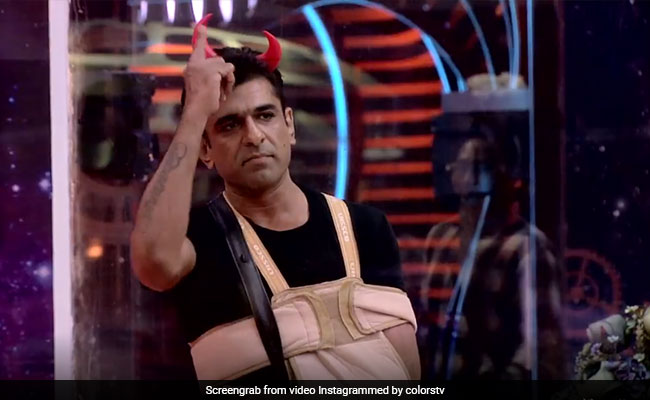 Bigg Boss 14: Eijaz Khan in a still from the show. (courtesy colorstv)

Tonight's episode of Bigg Boss 14 began with this week's luxury budget task, as a part of which the housemates were divided in two teams - 'Shaitaan' (devils) and 'Farishtey '(angels). As a part of the task, the angels had to follow the orders of the devils. Eijaz Khan, Nikki Tamboli and Aly Goni comprised the devils team, while Jaan Kumar Sanu, Rubina Dilaik, Abhinav Shukla and Pavitra Punia were a part of the angels team. Jasmin Bhasin, who is this week's captain, was the sanchalak (moderator) of the task. During the task, Nikki Tamboli asked Rubina to tear her soft toy, while Eijaz asked Jaan Kumar Sanu to put his hand in the toilet seat. He also told Jaan, "If you mess with me again, I will make you lick this hand." Jaan's friend Nikki was the one who suggested to give the aforementioned task to Jaan. Team Devils won the luxury budget task.

During the task, Eijaz accused moderator of the task Jasmin of being biased and helping out the 'Farishtay' team. In another segment of the show, Jasmin's friend and wild card entrant Aly Goni shouted at the actress after he felt that she was ignoring him. Aly told Jasmin, "When I am talking to you, don't ignore me. Main bhi yahaan baitha hoon na! Meri awaaz nahi aa rahi? Main tod doon isko (I am sitting here too! Am I not audible? Should I break this glass partition)?" Later, Jasmin apologised to Aly Goni.

In the red zone, the unsafe contestants Naina Singh, Rahul Vaidya and Shardul Pandit got into a fight after Naina accused them of not helping her out with the chores. Rahul and Shardul disagreed with Naina added that other than cooking, they do all the chores that they can.

In tomorrow's episode of Bigg Boss 14, the show's host Salman Khan will be interacting with the inmates.