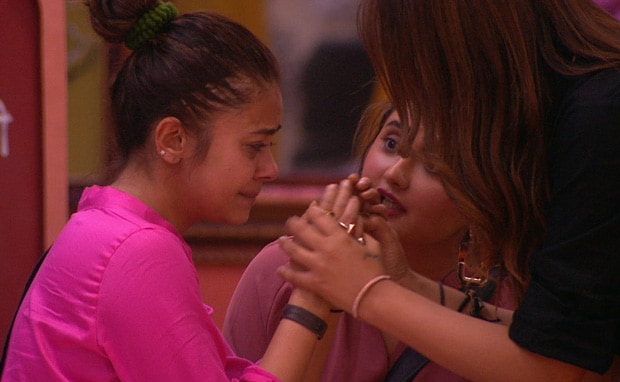 On 53rd day in the Bigg Boss house, Sidharh Shukla asked Devoleena whether she has asked to save Rashami during the captaincy task or not. Devoleena clarified her stance and told him that she had this conversation with Shefali and it was an assumption. However, this lead to an argument between Shefali, Rashami and Sidharth, where Shefali said Devoleena is not making things clear between the contestants. The fight continued but this time between Asim and Sidharth. The duo were once again at loggerheads, where Asim provoked Sidharth to push him. His actions led to an ugly fight between them. Shefali, who was taking Asim's side, called Shehnaaz names for supporting Sidharth. To this, Shehnaaz accused her of starting the fight between Sidharth and Asim.

Devoleena got upset with the fight. She shouted at Vishal for sharing the information, which was to be a candid conversation between them, with Sidharth. She accused him of passing on information with opponent team members and said that she won't ever trust him again. Furious Vishal told Rashami and Devoleena that he will never think of them as his friends again. Just when the housemates were about to sleep, Asim started a fight with Sidharth, who was sitting quietly in the garden area. He began commenting on Sidharth's actions and that led to another major fight between them. They both got so furious that Bigg Boss interrupted and asked them to stay away from each other.

When Shefali tried to solve the fight, Paras and Mahira accused her of adding fuel to the fire by poking Asim to react to Sidharth's action. However, Aarti interrupted and took Shefali's side. She said Shefali and Himanshi have never said anything bad about Sidharth and Asim. But Paras continued to speak against Shefali and that made Aarti angry. She started shouting at Paras.

Later, Paras and Shefali fought over what the former has said about her. Shefali refused to agree on Paras' point and Himanshi supported her in the fight. During the fight, Bhau told Paras to back out and not talk to Himanshi rudely or even touch her in any manner after he commented about her physical appearance.

The next day, the contestants woke up to Tu Kheech Meri Photo song. Devoleena and Aarti share breakfast. Around mid-day, Bigg Boss announced that since Paras' team won, two members from his team and two members from Shehnaaz's team will become the contenders of the captaincy. The captain will have the power to immune one more person. The contestants started making plans about the nomination round.