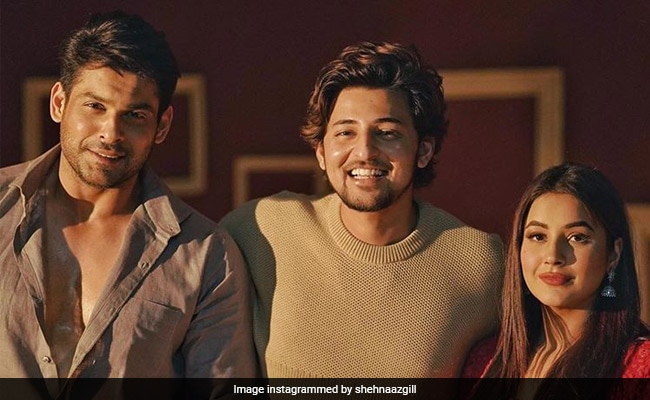 It's happening folks! We will get to see the magical chemistry of Shehnaaz Gill and Sidharth Shukla once again, this time in a music video reportedly titled Bhula Dunga. The announcement of Sidharth and Sehnaaz's first project together has left their fans really excited. Sehnaaz and Sidharth were arguably the most popular contestants on reality show Bigg Boss 13, which concluded last month with Sidharth as its winner. The song in which the duo will feature will be sung by Darshan Raval. Sharing the news on social media, Darshan posted a picture of himself posing with Shehnaaz and Sidharth and wrote: "Ye do khoobsoorat logon ke saath aa rahe hai ek khoobsoorat gaana sirf aur sirf aap sab ke liye."

During Bigg Boss 13, Shehnaaz confessed her love for Sidharth several times. The duo used to occupy spots on the trends' list for their friendship and equation inside the house. After the show concluded, Sehnaaz sent the Internet into a tizzy by sharing a photo of herself and Sidharth from the sets of her show Mujhse Shaadi Karoge. Take a look:

Other than Shehnaaz and Sidharth, several other Bigg Boss 13 contestants have also collaborated for music videos. Paras Chhabra and Mahira Sharma co-starred in Sonu Kakar's track Baarish while Asim Riaz and Himanshi Khurrana are all set the recreate their chemistry in Neha Kakkar's music video Kalla Sohna Nai.

Shehnaz Gill has featured in several Punjabi music videos and films such as Kala Shah Kala and Daaka.