Sreesanth and Surbhi Rana's fight, which broke out on Thursday during the captaincy task, continued on Friday too 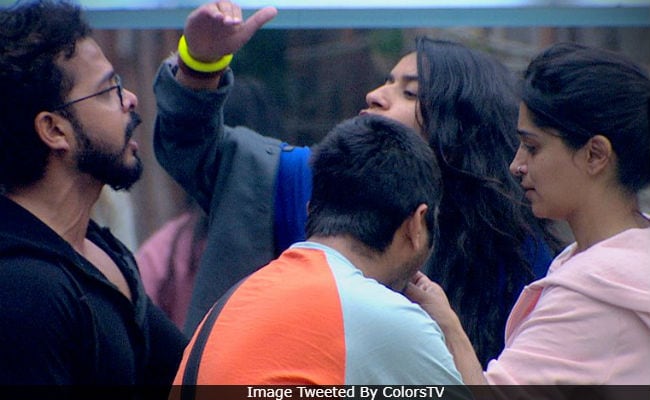 Sreesanth and Surbhi Rana's fight, which broke out on Thursday during the captaincy task, continued on Friday too. Surbhi had vowed that she will make Sreesanth cry and in turn, he would leave the house. Surbhi spoke about Sreesanth's "fights" during his cricketing career, which agitated him. Dipika Kakar took a stand for Sreesanth and fought with Surbhi, who accused the actress of supporting him despite his fault. While the fight was going on, Bigg Boss announced that it was time for the housemates to unanimously nominate three contestants for kalkothri ki sazaa. Sreesanth, Deepak and Surbhi's names came up for the punishment.

Soon, Bigg Boss gave the contestants a chance to help one member from coming out of the kaalkothri. In the task, three locked boxes were kept which had the key to the kaalkothri and there were ice slabs kept in the garden area, each of which had a key hidden in them for the boxes. Romil played for Sreesanth, Rohit for Deepak and Karanvir for Surbhi. The trio had to sit on one ice slab with the box and had to convince the others to help Sreesanth, Deepak and Surbhi by breaking the other ice slab with a hammer. Jasleen played the role of the sanchalak. Megha and Dipika helped Romil and they were the first ones to complete the task. As a result, Sreesanth came out of the kaalkothri

Later in the day, Bigg Boss assigned a secret task to Megha, in which she had to put some stuffs in different parts of the house, to spread the fear of black magic (fake, of course). Megha did her task with full determination. After rest of the housemates slept, she completed the task and also narrated a fake story to Jasleen, saying that she was woken up by someone.

On Saturday, Salman Khan will review the week's activities on the Weekend Ka Vaar episode.