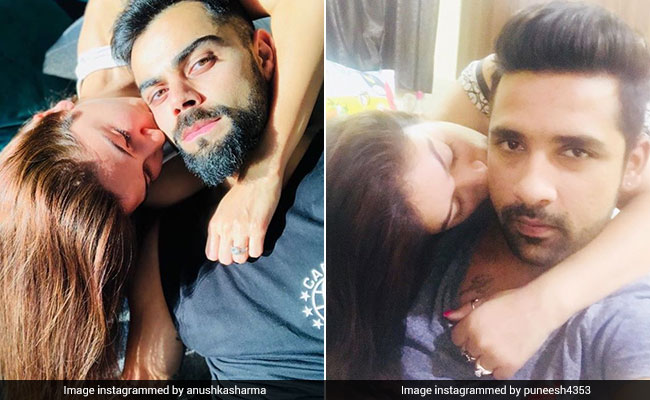 New Delhi: Over the weekend, actress Anushka Sharma posted a picture of herself kissing husband Virat Kohli and within no time, the post went crazy viral. Bigg Boss 11 contestants Bandgi Kalra and Puneesh Sharma, who are currently dating, posted a similar picture but were heavily trolled. "Copying Virat and Anushka. Ha ha ha," read a comment on their picture. Another section of Instagram users told them 'to get married and then post pictures in this pose.' "Both of you should just get married than copying a married couple Anushka and Virat. They're married this pose suits them better." Some of their Bandgi and Puneesh's fans defended them and comments such as "it's copied but that's ok" and "you guys look amazing" were posted.

See the picture which Puneesh posted.

Now, see what Anushka Sharma shared. The picture has got over 2.6 million likes (and still counting).

Promoted
Listen to the latest songs, only on JioSaavn.com
Anushka Sharma and cricketer Virat Kohli married at a Tuscan resort in Italy last December. They hosted a wedding reception in Delhi and later another one in Mumbai. Anushka and Virat spent last weekend together in Mumbai and on Monday, the actress flew to Bhopal to shoot for Sui Dhaaga, her next film with Varun Dhawan. She was last seen in Pari, also produced by her.

Meanwhile, Bandgi Kalra and Puneesh Sharma fell in love on Bigg Boss 11, which was won by TV actress Shilpa Shinde. Puneesh was one of the final four finalists while Bandgi was eliminated weeks before the finale. Bigg Boss 11 was hosted by Salman Khan.