Bigg Boss 11, October 27: Evicted contestant Priyank Sharma made a re-entry to the show 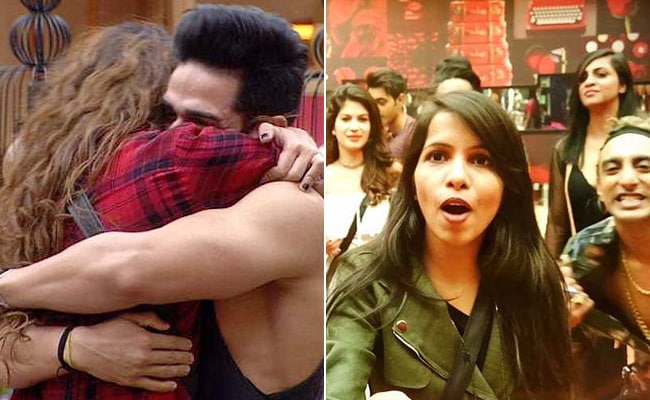 New Delhi: Today's episode had it all - drama, surprise and a lot of fun. Bigg Boss made its fans nostalgic by playing Shah Rukh Khan's old song I'm The Best. Priyanka Sharma, who got evicted from the show in the first week, made a grand re-entry in the show, surprising all the contestants of the house. Hina Khan, Luv Tyagi and others were extremely happy to see Priyank while Benafsha Soonawalla busted into tears of joy to see her good friend Priyank. Vikas Gupta because of whom Priyank had to leave the show, felt elated to re-unite with his friend. As soon as Priyank entered the house, Arshi jokingly started flirting with him.

Bigg Boss asked Dhinchak Pooja to also create a video of her song on housemates, featuring the gharwale. Amongst the making of the video, Sapna Choudhary made a comment: "Agar kisi ko brain tumour kraana ho, to Dhinchak ke gaane sunaao." Sapna also lost her calm because Dhinchak Pooja made fun of her health problem.

Pooja films her new video inside the #BB11 house! Tune in tonight at 10:30pm to watch this new viral sensation! #BBSneakPeekpic.twitter.com/tUhV6ZagLa

Sapna also lashed out at Arshi Khan and blamed her for provoking Pooja for the demeaning lyrics. Later, Arshi was threatened when Sapna said that she will reveal Arshi's personal secrets. Arshi broke into tears after the rough war of words with Sapna.

Sapna Choudhary loses her calm at Arshi Khan & Akash Dadlani. Tune in tonight at 10:30pm to find out why! #BB11#BBSneakPeekpic.twitter.com/5tvUwo29iZ

Promoted
Listen to the latest songs, only on JioSaavn.com
Dhinchak Pooja's video on the contestants titled Bigg Boss Bigg Boss entertained the gharwalewhile Hina Khan made fun of her.