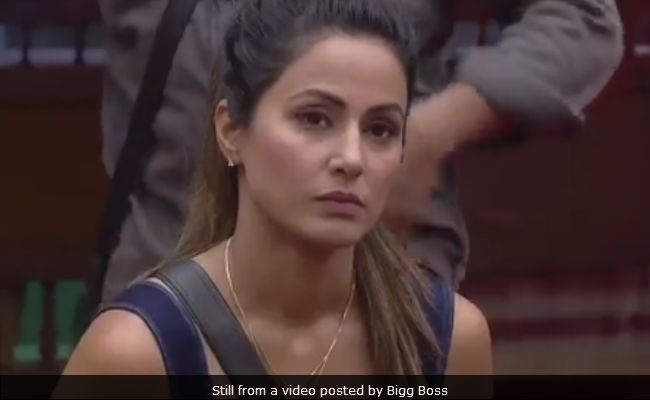 New Delhi: Bigg Boss 11 on October 20 started on a beautiful note with Diwali spirit all around the house. Bigg Boss called Sapna Choudhary in the confession room and asked her to inform everyone that the housemates had to select two contestants from Vikas Gupta's team (also the winning team), who performed extremely well in the luxury budget task. The gherwale chose Sapna Choudhary and Hina Khan to perform the captaincy task with mutual consent though Benafsha Soonawala wasn't happy with the decision as she thought she performed equally well in the task. Shilpa Shinde supported Benafsha while others stuck to their decision.

Thus, Sapna and Hina became two contenders for the captaincy.

Later, Bigg Boss revealed that the captaincy task would begin later in the evening, where Hina and Sapna would choose one of the contestants as their representatives, who will sit inside separate glass enclosures. The other inmates of the house will choose sides and will put sand into the glass container belonging to the other nominee. The representative will have to keep throwing the sand out of the container. At the end, the contender with less sand in her glass container will win the captaincy task. Hina chose Hiten Tejwani and Sapna chose Puneesh Sharma as her representative.

The housemates helped their respective choice of contenders in the task and put all their strength in putting sand into the opposition's container. Arshi like always was least bothered about performing in the task.

With more sand in her container, Hina won the task and became the second captain of the house.

Arshi Khan wasn't happy with the decision and lashed out at other inmates, who helped Hina in the task. Sapna also jumped into a verbal spat with Vikas and said that he did not help and contributed in the task. Sapna tagged Vikas as a 'baby' and asked him to go to hell.

Later, the contestants nominated for evictions this week, were given a chance to give an explanation to the other housemates as to why do they deserve to stay in the Bigg Boss house, in the form of a Talk show, hosted by Vikas Gupta. The task started with rapper Akash Dadlani, who said that he deserved to be on the show because he's helpful and humorous. The second one to come up was Luv Tyagi, who was also one of the padosis of Bigg Boss.

Sapna Choudary claimed that Luv is not aware about what's happening in the house.

Puneesh blamed Luv and said that Luv wanted to create a love triangle amongst himself, Puneesh and Bandgi Kalra.

Promoted
Listen to the latest songs, only on JioSaavn.com
With mutual decision, the housemates concluded that Luv Tyagi should be eliminated from the house.

Well, the gherwale think Luv should go, but what do you think? Save your favourite contestant and stay tuned for more updates from Bigg Boss 11.