Bigg Boss 11, October 20: Who Is The Next Captain - Hina Khan Or Sapna Choudhary?

Bigg Boss 11: The contestants of the house will choose Hina Khan and Sapna Choudhary to compete for the captaincy task 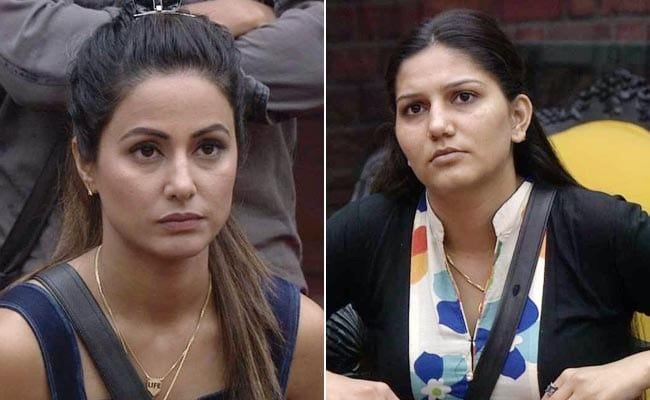 Bigg Boss 11: Hina Khan and Sapna Choudhary will compete against each other.

New Delhi: In Wednesday's episode, we saw that Vikas Gupta's team performed extremely well in the luxury budget task Jo mudh gaya wo udh gaya and hence won it. Colors TV reports that in today's episode, Bigg Boss will ask each contestant of the house to nominate two members from Team Vikas, who will further perform the captaincy task. The two contestants with the maximum number of votes will fight against each other to become the second captain of the house. It is reported that the gharwale will choose Hina Khan and Sapna Choudhary (who are the well-deserved candidates) to be nominated for the captaincy.

The captaincy task will begin later in the evening, where Hina and Sapna will choose one of the contestants as their representatives (Hiten Tejwani and Puneesh Sharma respectively), who will sit inside separate glass enclosures. The other inmates of the house will choose sides and will put sand into the glass container belonging to the other nominee. The representative will have to keep throwing the sand out of the container. At the end, the contender with less sand in her glass container will win the captaincy task.

The race to the captaincy begins! Who will win between @eyehinakhan and Sapna Choudhary! #BB11#BBSneakPeekpic.twitter.com/C15X4akBAz

Later, the contestants nominated for evictions this week, will be given a chance to give an explanation to the other housemates as to why do they deserve to stay in the Bigg Boss house. Sapna Choudary will lash out at Vikas Gupta while Puneesh Sharma will blaim Luv Tyagi that he is in the show to create a love triangle amongst himself, Puneesh and Bandgi Kalra.

In tonight's episode of #BB11 at 10:30 PM, every nominated house mate will say why they deserve to stay in the house. #BBSneakPeekpic.twitter.com/VENvoz1pjT

Promoted
Listen to the latest songs, only on JioSaavn.com
It is also reported that Priyank Sharma, who left the show in the first week itself will return as a wild card contestant, along with Internet sensation Dhinchak Pooja.