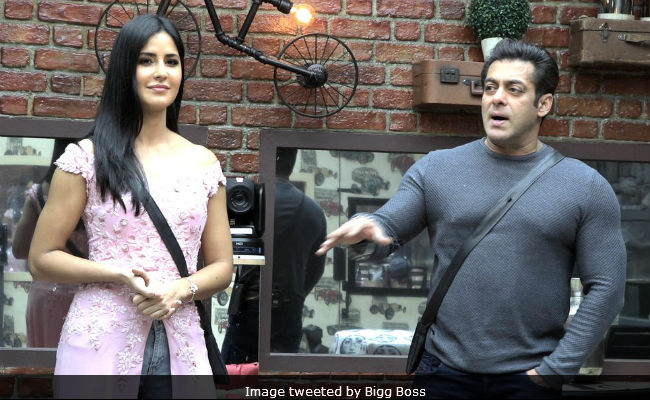 New Delhi: Yay! Today's episode will be fun of Katrina Kaif's swag, who is a special guest on Salman Khan's Weekend Ka Vaar episode. Katrina will enter the Bigg Boss house tonight and Bigg Boss' official page reports that Katrina will have her special swayamvar in the house. Also Salman will introduce Katrina to his secret channel. Both Tiger Zinda Hai stars will watch the gharwale without their knowledge. Salman will show Katrina the whole house from his secret space. From bedroom and Kitchen (jaha khaane se zada taane chalte hain) to living area, Katrina will have an idea of the places.

Also Salman will ring up the gharwale. Akash Dadlani will receive the phone but Salman will ask him to handover it to Shilpa Shinde. Salman will ask Shilpa to welcome his special guest or rather ask her to do her swagat with swag. And, Salman will further ask the boys to impress Katrina.

The #BB11 boys try to impress Katrina Kaif! Catch it all tonight at 9 PM on #WeekendKaVaar. #BBSneakPeekpic.twitter.com/RIQQl3GKUp

Today Puneesh and Luv Tyagi will compete in the sultani akhaada.

Promoted
Listen to the latest songs, only on JioSaavn.com
After all the fun with Katrina, it will be time for eviction. Salman will ask each contestant to tell who do they think will leave the house tonight out of Puneesh Sharma, Bandgi Kalra and Luv Tyagi. Akash will take Puneesh's name quoting a reason that Puneesh was rude this entire week. Joining Akash in his decision will be Arshi, who'll say that the audience might want to see Puneesh minus Bandgi while Hina Khan will take her friend Luv Tyagi's name.

Who do you think will get evict from the house this week? Keep reading this space for more updates on Bigg Boss 11.