Bigg Boss 11: It's Saturday, that time of the week, when Salman Khan reviews the activities of all the contestants 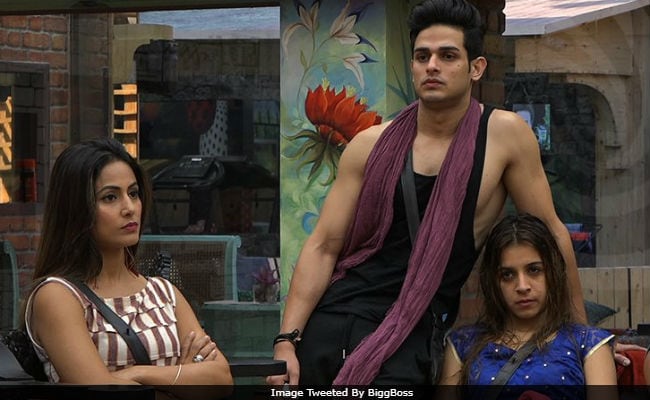 New Delhi: It's Saturday, that time of the week, when Salman Khan reviews the activities of all the Bigg Boss 11 contestants and this season, the Weekend Ka Vaar episodes are about the superstar's vaar (quite literally). Despite repeated warnings, the rules are being flouted, personal comments are being made. This week's main highlight was the fight between Benafsha Soonawalla and Akash Dadlani. During the fight, Benafsha pulled Akash's hair, for which, she was punished. The Bigg Boss 11 house is now mainly divided into groups - Benafsha, Hina Khan, Priyank Sharma and Luv Tyagi Vs Akash, Arshi Khan, Shilpa Shinde, Bandgi Kalra and Puneesh Sharma.

The housemates will have to face @BeingSalmanKhan's judgement in tonight's explosive #WeekendKaVaar. Tune in at 9 PM to catch it. pic.twitter.com/I0mnoIwi1S

As always, the contestants failed in the luxury budget task, courtesy cheating and sleeping. While Hina, Priyank, Vikas Gupta, Benafsha, Hiten Tejwani, Luv and Sapna Chaudhary went against the rules, the captain of the house or the sanchalak slept off during the task. And... at the end, blame game followed.

What will be Salman's take on the luxury budget task?

In a sneak peek video, we saw Arshi blaming Hina for the fights while Hina reiterated.

Meanwhile, Kapil Sharma will make a guest appearance in tonight's episode and will lighten the mood of the contestants with his jokes. He will also promote his upcoming film Firangi.

Promoted
Listen to the latest songs, only on JioSaavn.com
This week, Priyank, Benafsha, Sapna, Sabyasachi Satpathi, Mehjabi Siddiqui, have been nominated for eviction. Dhinchak Pooja, who entered the show as a wildcard contestant was evicted last week.

Watch this space for more stories related to Bigg Boss 11.