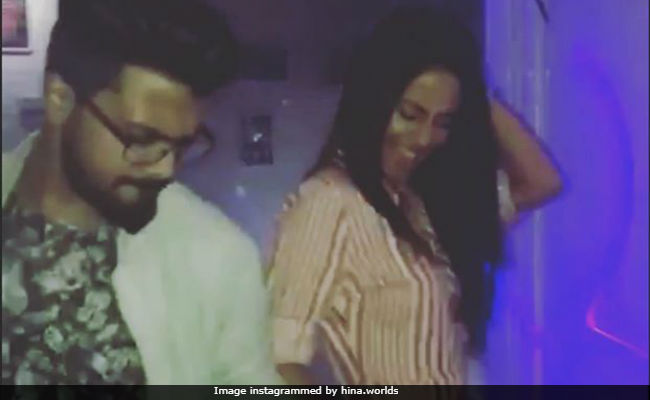 New Delhi: Remember Hina Khan's morning dance routines during Bigg Boss 11? Guess she's back to her grooving sessions even after the show. In an Instagram video, posted by a fan club, Hina Khan can be seen dancing 'like no one is watching' to one of the songs of her co-contestant Sapna Chaudhary, Teri Aakhan Daa Yoh Kajal. Hina partied with boyfriend Rocky Jaiswal and Rohan Mehra and Kanchi Singh, her Yeh Rishta Kya Kehlata Hai co-stars. (Rohan was a part of Bigg Boss 10). However, none of Hina's Bigg Boss 11 contestants have been pictured. Hina Khan had earlier excused herself from any public appearances and after-show parties, due to her mother's ill-health. In an interview to Times of India, Hina Khan talked about how she is still in touch with Priyank Sharma, and wishes to reconnect with Luv Tyagi, who is busy spending time with his family. On being asked about Sapna, Hina said, "I also miss Sapna a lot. I want to visit her in Delhi and meet her mom."

Here are some more pictures and videos of Hina Khan enjoying with her close friends:

The best time to party is WHENEVER YOU CAN !!!

Promoted
Listen to the latest songs, only on JioSaavn.com
Hina Khan had recently shared an image of her beloved 'Pooh' gifted to her by her boyfriend Rocky Jaiswal, with a 'Thank You' for him, "A lil yellow, a lil blue but u are my best POOH..Look who's back!!! Thank you @rockyj1 I LOVE U RO" on her Instagram.

A lil yellow,a lil blue but u are my best POOH..Look who's back!!! Thank you @rockyj1 I LOVE U RO

During her stay inside Bigg Boss house, Hina Khan was consistently called out for her 'loudness' and rude behavior towards Shilpa Shinde. She was also scolded by host Salman Khan for not standing up against her friend Priyank Sharma, who body-shamed fellow inmates Arshi Khan and Shilpa Shinde. Bigg Boss 11 ended last week, and Hina Khan lost out the winner's trophy to Bhabhiji Ghar Par Hai actress Shilpa Shinde.
Comments
hina khanhina khan bigg boss 11