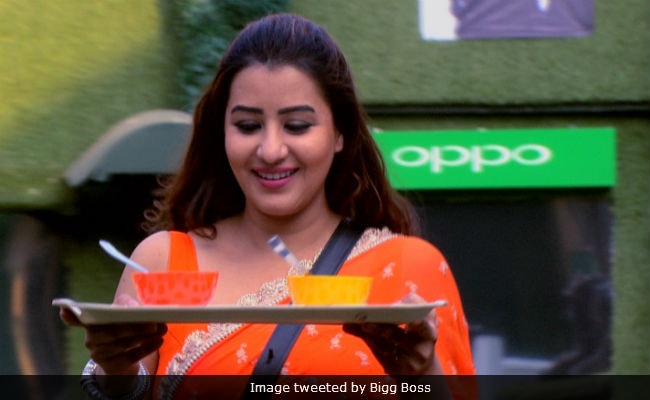 New Delhi: The Bigg Boss 11 finale is inching closer and Twitter's already picked their favourite contestant as the winner. 'Shilpa Shinde For The Win,' has been trending all of Sunday with some even declaring Shilpa as the actual winner ahead of the finale being aired on television. The Bigg Boss 11 grand finale will kick-off with the four finalists - Shilpa Shinde, Hina Khan, Vikas Gupta and Puneesh Sharma - in the hot seat, and will be hosted by Salman Khan. PadMan Akshay Kumar will join the show host to announce the winner on stage. Meanwhile, Vikas and Puneesh are reportedly out of the winner's list already, state early reports.

Will Salman and Akshay take Shilpa Shinde's name as the winner? Only tonight's episode will tell - don't forget to catch the grand finale of Bigg Boss 11 at 9pm tonight on Colors.

About Shilpa Shinde's predicted win, fan clubs of the actress have also conducted polls on Twitter, the results of which show Shilpa topping the list with 70 per cent votes while Vikas and Hina rank next in order and Puneesh in the last spot. A netizen also summed up why Shilpa deserves to take the trophy home: "Instead of getting into every fight, Shilpa Shinde wisely chose where to be vocal and where to take a backseat and just be a spectator. Her journey in Bigg Boss 11 reminds us of Bigg Boss 8 winner Gautam Gulati. Shilpa Shinde for the win," read a tweet.

Here's how much Twitter is convinced that Shilpa Shinde is the winner.

Shilpa Shinde For The Win

I love watching Big Boss. I hope bigg boss 11 season winner will be Shilpa. Shilpa Shinde For The Win.

Shilpa Shinde For The Win

She has all the qualities to make her bigg boss 11 winner
She cook Food Selflessly for everyone.
She help selflessly for Everyone.

She never abuse for anyone ,no need to Groupism, she playing like Lone Worrier
She done each nd every task.

Apart from Salman Khan and Akshay Kumar's masti-shasti on the grand finale tonight, the ex-contestants will also contribute to a blockbuster finale with their entertaining performances. Do you agree with Twitter about Shilpa Shinde? Tell us in the comments below.
Comments
bigg boss 11shilpa shinde

Siddhant Chaturvedi Reveals He Was Stereotyped For Looking 'Unconventional'