Bigg Boss 11, January 14: PadMan Akshay Kumar And Who Else To Expect On The Grand Finale

Bigg Boss 11 Grand Finale: Apart from Salman and Akshay, ex-Bigg Boss 11 contestants will also deliver blockbuster performances to round off the finale 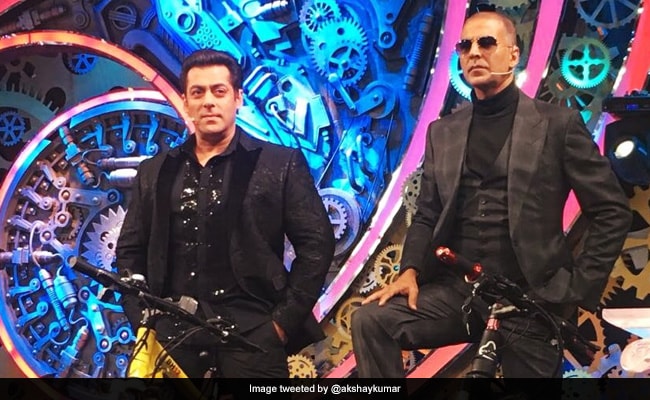 New Delhi: The Bigg Boss 11 finale promises to bring: "drama, entertainment and loads of non-stop masti," tonight with Salman Khan returning to the Bigg Boss 11 stage for the last time. Of all the contestants who joined the show last year, the four finalists have battled their way to the top four and on the grand finale tonight, one of Hina Khan, Shilpa Shinde, Vikas Gupta and Puneesh Sharma will take the trophy home. And to announce the big winner of Bigg Boss 11, Akshay Kumar will join Salman Khan on stage. Akshay's appearance is actually as part of PadMan promotions, which is releasing on January 25.

Padman @akshaykumar will join Tiger @BeingSalmanKhan to announce the winner of #BB11. Don't miss them, tonight at 9 PM on the #BB11Finale! pic.twitter.com/tAAFKVZpMt

Find out who will win #BB11. Join Pad Man and Sal Man tonight for the #BB11Finale at 9 pm only on @ColorsTV!@PadManTheFilm@BeingSalmanKhan@SonyPicsIndia@kriarjpic.twitter.com/HABGwKFbaJ

Apart from Salman and Akshay, ex-Bigg Boss 11 contestants will also deliver blockbuster performances to round off the finale. However, the elimination of the fourth contestant will be rather interesting - the particular housemate's family members will be asked to enter the house and walk out with the eliminated one.

Here are glimpses of what all will go down on the final episode of Bigg Boss 11:

Puneesh Sharma and his girlfriend - ex-contestant Bandgi Kalra - are going to set fire on water with their performance to Tip Rip Barsa.

Aarshi Khan and Hiten Tejwani, who often featured in headlines for their onscreen flirting shirting, will entertain us all with a super fun act!

Hina Khan will take the stage with her two best friends on the show - Luv Tyagi and Priyank Sharma. Hina has also signed up for a solo performance to Main Heroine Hoon. Take a look:

Watch #BB11 finalist, @eyehinakhan give a graceful performance in the #BB11Finale, tonight at 9 PM. pic.twitter.com/kZzd7AdcM3

.@eyehinakhan will give a scintillating performance with her two best friends, Luv Tyagi and @ipriyanksharmaa on the #BB11 stage! Don't miss this, tonight at 9 PM only on the #BB11Finale. pic.twitter.com/fcyprDl9oO

Shilpa Shinde and Vikas Gupta will also make the viewers roll on the floor laughing with their hilarious performance.

Who do you think will be the winner of Bigg Boss 11? Tell us in the comments below.
Comments
Bigg Boss 11Salman Khan