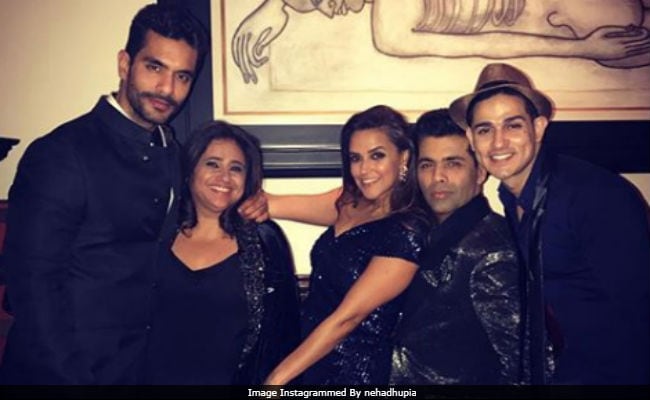 New Delhi: Superstar Shah Rukh Khan had hosted a grand birthday party for friend Kaajal Anand on Friday evening at his Mannat residence. Bollywood's A-listers like Aishwarya and Abhishek Bachchan, Deepika Padukone and Ranveer Singh, Kareena, Karisma and Ranbir Kapoor, Karan Johar, were among the many celebrities who attended the party and so was ex-Bigg Boss 11 contestant Priyank Sharma. Priyank partied with Karan Johar, actress Neha Dhupia and others. Inside pictures from the party were shared by Neha, who was one of the mentors of Priyank's debut reality show Roadies Rising. Priyank was evicted from Bigg Boss 11 a couple of weeks ago. The finale is scheduled to take place later this evening.

See this picture of Priyank with KJo, Neha, Angad Bedi and Kaajal Anand.

Priyank also shared a couple of pictures from the party with Neha and wrote, "Hey beautiful. About last night with this lady."

Hey beautiful about last night with this lady @nehadhupia

Several media reports suggested that Priyank might star in Karan Johar's Student of the Year 2, but there's no confirmation about it yet.

Of his career plans, he told news agency PTI, "I am too new as an actor, so I am open to anything that is interesting. Bigg Boss is just the beginning of my career in a way, it is an experience of a lifetime."

Promoted
Listen to the latest songs, only on JioSaavn.com
"I am very happy I reached this far in the show. This year has been great for me professionally, Roadies to Spiltsvilla to Bigg Boss. I think Bigg Boss is a very unpredictable show," he added.