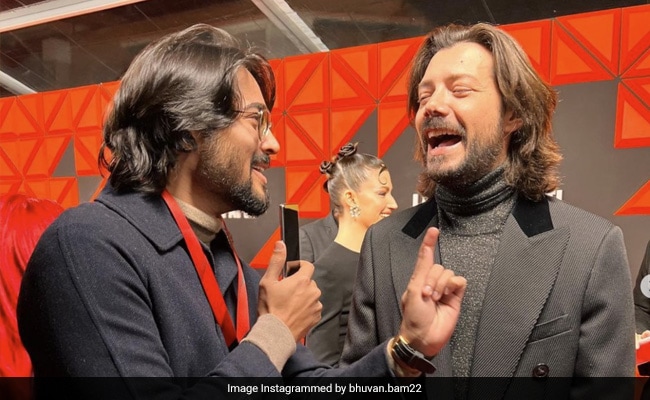 YouTuber, singer and actor Bhuvan Bam is living the dream. Well, at least the dream of thousands of Money Heist fans across the world. Ahead of the release of  Money Heist, season 5 - part 2, Bhuvan Bam interacted with several members of the cast in Madrid, Spain. Bhuvan Bam was clicked asking questions and sharing a laugh with actors Álvaro Morte, Úrsula Corberó, Itziar Ituño and Pedro Alonso. For the uninitiated, the actors play the roles of Professor, Tokyo, Raquel and Berlin respectively. What's more, Bhuvan Bam was even captured hugging Pedro Alonso in one of the images.

Sharing the post, Bhuvan Bam wrote, “Gave them ideas on how to kill Arturo...” referring to the series' antagonist Arturo Roman, played by Enrique Arce. We won't blame you if you are feeling a tad bit jealous because we know we are.

Before that, Bhuvan Bam also announced his arrival in Spain with a Boomerang ahead of the press interaction. In the caption, Bhuvan Bam wrote, “Arrived in style!” and tagged the official handle of La Casa de Papel, the original name of the Spanish crime drama.

While the excitement for the upcoming episodes among fans is palpable, it is also expected to be a bittersweet premier when the second part of season 5 releases on December 3. After all, with this, the much-loved show is coming to an end. However, even as the adventures of the Professor and his motley crew draw to a close, it seems that the Money Heist universe has more to offer.

Money Heist star Pedro Alonso on Tuesday announced a spin-off origin series that will revolve around his character Berlin. Berlin is the Professor's elder brother and the second-in-command of the heist. The series will release in 2023.

The same was also announced on the official Twitter account of La Casa de Papel. Attached to a teaser, the tweet said, “This heist might come to an end... But the story continues... Berlin 2023, only on Netflix.”

This heist might come to an end... But the story continues... Berlin 2023, only on Netflix.#LCDP5#MoneyHeistpic.twitter.com/lANhx8Ayv4

Money Heist can be streamed on Netflix from Friday, December 3.