Bhumi Pednekar often trends for her work-out posts, which are always accompanied by details of calories burnt in the gym 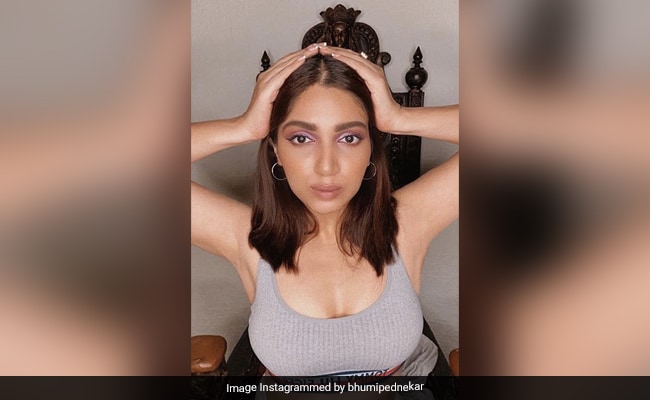 Move over, guys. 'Queen' Bhumi Pednekar is here. The 30-year-old actress dropped a stunning photo of herself in trendy athleisure, captioning it with just three emojis. The first one is a crown, because she feels like a queen, clearly; the second one is the red heart emoji followed by sparkles. Bhumi's Instafam instantly showered her with a whole lot of love for her athleisure look - she jazzed up her look with metallic purple eye shadow, matte lip colour and simple hoop earrings. Varun Dhawan, who was to co-star with Bhumi Pednekar in Mr Lele (now postponed indefinitely), cheered for her and dropped the fire emoji. So did several Instagram users, who also commented: "Wow, just wow."

Bhumi Pednekar's post about self love is just the kind of mid-week motivation you need:

Bhumi Pednekar recently celebrated her birthday and her quarantine birthday party kind of looked like this: "With everything happening around us, am so so overwhelmed by the love that everyone has shown... Thank you so much," she wrote.

As I turn a year older, all I can think of is how fortunate & grateful I am. To be surrounded by such love and support. To have such incredible people in my life. To be able to follow my passion and have a job that I love. To have the love the audiences give me. To be able to give back and work towards making this world a better place. To have the means to protect the ones I love. I am so grateful for everything. With everything happening around us, am so so overwhelmed by the love that everyone has shown... Thank you so much ❤️ #gratitude #thankyou

Every so often, Bhumi Pednekar posts photos of herself, sending Instagram into a tizzy. Here are just a few of them. She also often trends for her work-out posts, which are always accompanied by details of calories burnt in the gym.

Bhumi Pednekar is best known for her roles in films such as Dum Laga Ke Haisha, Toilet: Ek Prem Katha, Shubh Mangal Saavdhan and Netflix's Lust Stories, for a segment directed by Zoya Akhtar. Sonchiriya, Saand Ki Aankh, Bala and Pati Patni Aur Woh are also some of her popular films. She was last seen in the 2020 release Bhoot - Part One: The Haunted Ship, starring Vicky Kaushal in the lead role. She has films such as Dolly Kitty Aur Woh Chamakte Sitare and Durgavati in the line-up.