Bholaa Teaser: Ajay Devgn Is A Trishul-Wielding Man Of Mystery

The film is directed and produced by Ajay Devgn 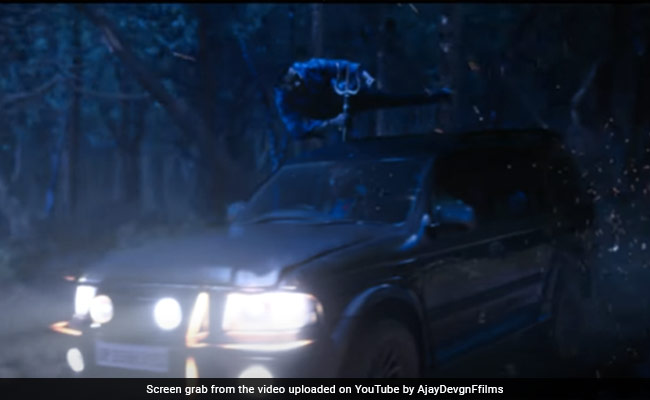 Ajay Devgn, on Tuesday, released the teaser of his new directorial Bholaa. The over-one-minute-long video starts with a warden of an orphanage looking for a girl named Jyoti. After finding the girl, the warden instructs her, "Jyoti, Aaj sham ko zyada der tak khelna mat aur raat ko jaldi sojana. Kal tumse milne koi aa raha hai (Jyoti, don't play for too long and go to bed early tonight. Someone is coming to meet you tomorrow.)" In the next frame, the girl can be seen sleeping with the other kids in the orphanage and curious about her family. She can be heard saying, "Papa, mummy, bhai, behan, dada, dadi, aur kaun rishtedar hote hai? Mujhse milne kaun aa raha hai?(Papa, mummy, brother, sister, grandmother, grandfather, what other relatives can be there? Who is coming to see me?)"

A few frames later, enter Ajay Devgn, who can be seen reading Bhagavad Gita. A voice in the background can be heard saying, "Kaun hai yeh (Who is he?)," while Ajay Devgn can be seen as a prisoner, who is being released. Soon another voice replies, "Kaun hai yeh aur kaha se aaya hai, kisiko pata nahi aur jisko pata tha woh bacha nahi (No one knows who he is or where he comes from and one who did know, isn't alive now.) Kehte hai ki jab woh bhasam lagata hai toh na jaane kitno ko bhasm kardeta hai (They say, when he smears ash on himself, his enemies turn to ashes.) We soon hear another voice, "Bhaiya ka naam kya hai (What's his name)," another voice replies, "Naam bataya toh tu iske pairo par gir jayega (If I tell you his name, you'll fall at his feet.)

In the last few seconds of the video, a text appears that reads, "Kaun hai woh (Who is he)." The video ends with an action scene, in which, Ajay can be seen jumping off his bike with a Trishul (trident) and attacking a moving car.

Ajay Devgn's Bholaa is the official Hindi remake of the 2019 Tamil film Kaithi that featured Karthi in the lead role. Other than directing and acting in the film, Ajay is also producing the film under his banner Ajay Devgn Ffilms. The film also stars Ajay's Drishyam co-star Tabu in the lead role.

Ajay Devgn's Drishyam 2, which is the official remake of the 2021 Malayalam film of the same name, released in theaters on Friday and has reportedly earned over Rs 60 Crore at the box office in its opening weekend.

Oscars 2023: To RRR And Naatu Naatu, With Love From Arjun Kapoor, Parineeti Chopra And Others