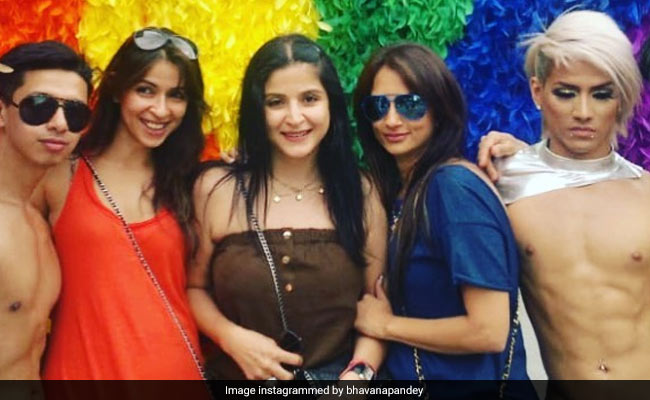 The Internet is filled up with rainbow love and why shouldn't it? It is pride month after all. The LGBTQ community celebrates pride month in June. The pride month honors and celebrates the LGBTQ community, commemorating New York's Stonewall riots, which took place in June 1969 and became a catalyst in the movement for equal rights. Well, Bollywood celebrities too marked the pride month on social media. Designer Bhavana Pandey, wife of actor Chunky Panday, shared a happy throwback from New York, presumably from the famous pride march, in which she features with her friends Maheep Kapoor, Seema Khan and members of the queer community. "Pride month," she captioned the post, adding rainbow and heart emojis.

The comments section of Bhavana Pandey's post was filled-up with loved up comments from friends. Maheep Kapoor dropped rainbow and heart emojis in the comments. Seema Khan added a few hearts. "Love it," wrote Neelam Kothari.

Bhavana Pandey, who runs an apparel label by the name LoveGen, became a star after featuring in Netflix's smash hit The Fabulous Lives Of Bollywood Wives, a series based on the lives of four star-wives - Bhavana Pandey (wife of Chunky Pandey), Seema Khan (married to Sohail Khan), Maheep Kapoor (Sanjay Kapoor's wife), and Neelam Kothari (married to Samir Soni). The show was backed by Karan Johar.

Bhavana and Chunky Panday's daughter Ananya is an actor, who made her Bollywood debut in the year 2019 with Dharma Productions' Student Of The Year 2, co-starring Tiger Shroff and Tara Sutaria. She has featured in a couple of films since then.