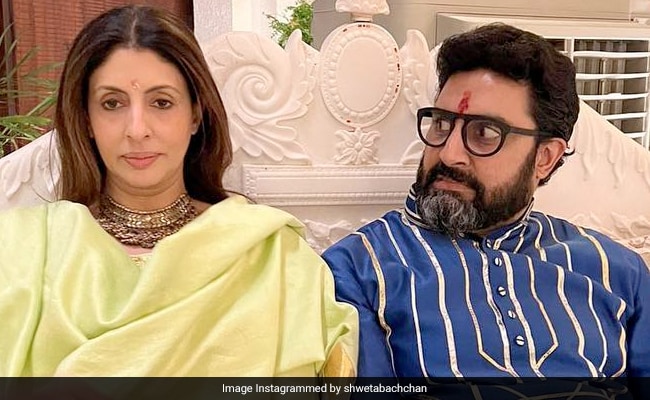 On the occasion of Bhai Dooj, Shweta Bachchan Nanda handpicked the best set of pictures from the festivities to wish brother Abhishek on the occasion. Abhishek Bachchan's expression in the first picture from the album is priceless. Shweta Bachchan captioned the post: "What a guy, just sunshine and rainbows. Happy Bhai Dooj." The post got a whole lot of love from Shweta's Instafam. Fabulous Lives Of Bollywood Wives star Maheep Kapoor dropped a heart emojis and an LOL emoji in the comments. "First image deserves a frame," read another comment.

Shweta Bachchan and Abhishek are absolute sibling goals. They often feature on each other's Instagram profiles and we love it when that happens. Shweta shared this throwback of herself with brother Abhishek from 1996.Here are some more posts of Abhishek and Shweta.

In terms of work, Abhishek Bachchan was last seen in Dasvi, co-starring Nimrat Kaur and Yami Gautam. He will also star in Ghoomer, for which he began shooting on his birthday this year. He will also be seen in the next part of Amazon Prime Video's Breathe: Into the Shadows.

Shweta Bachchan , daughter of veteran actors Amitabh and Jaya Bachchan, married Delhi-based businessman Nikhil Nanda in 1997. The couple welcomed Navya in the same year while son Agastya was born in 2000. In 2018, Shweta Bachchan Nanda made her debut as an author with the book Paradise Towers. Her son Agastya Nanda will soon make his Bollywood debut with Zoya Akhtar's The Archies, alongside Shah Rukh and Gauri Khan's daughter Suhana, and Sridevi and Boney Kapoor's daughter Khushi Kapoor.