Kapil Sharma, who appeared to be in a throwback kinda mood, also shared a photo with Aamir Khan from the Dangal success party 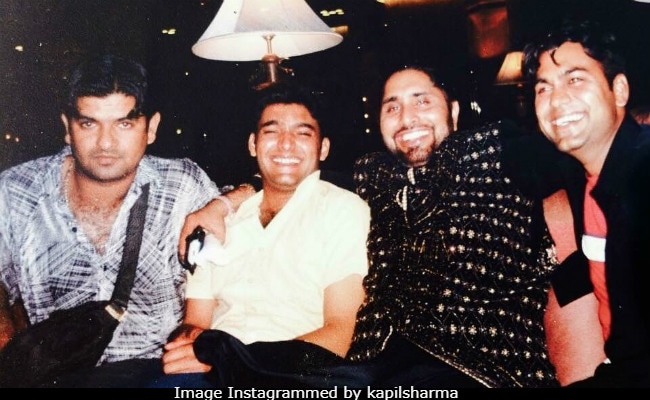 Can you identify Kapil Sharma in this photo? (courtesy kapilsharma)

Actor comedian Kapil Sharma took a trip down the memory lane and fished out what looks like a really old photo of himself with a bunch of friends. Sharing the throwback memory on Instagram, Kapil Sharma captioned the photo as "old memories". In the photo, Kapil can be seen hanging out with singer-composer Arvinder Singh, musician Teji Sandhu and another friend Dinesh Kumar. We bet the photo will make you do a double take to identify the much younger version of Kapil Sharma, who is almost unrecognisable in the click. Shared on Wednesday, Kapil Sharma's photo has been liked by over 1,83,530 fans in less than an hour.

Meanwhile, needless to say that fans have flooded the comments section of Kapil Sharma's new post with the often-asked query about his return to TV.

Kapil Sharma, who appeared to be in a throwback kinda mood, also shared a photo with Aamir Khan from the Dangal success party.

Earlier in October, the comedian announced the return of his once popular The Kapil Sharma Show with a tweet that read: "Jalad wapas aa raha hoon 'The Kapil Sharma Show' lekar aap ke liye sirf Sony TV par" but did not specify as to when exactly his show with air on television. Meanwhile, a report in Indian Express said that the makers are still working on the details of the show and hence, it has been pushed to the year end. "The makers do not want to start the show in a haste. As of now, the final creatives haven't been locked. There's a lot of pending work regarding the cast and the format and it's not possible to go on floors so soon. Even the set hasn't been erected yet. Thus, the makers and Kapil have taken a mutual decision to push the show towards the end of the year," Indian Express quoted a source as saying.

Kapil Sharma, whose popularity dipped after his fall-out with former colleague Sunil Grover, often opened up about his submission to alcoholism, battling depression and rehabilitation. After his last show Family Time With Kapil went off-air last year, Kapil Sharma trended on social media for photos of him, in which he was seen to have visibly gained weight. Kapil Sharma will marry his girlfriend Ginni Chatrath on December 12.