In the first photo, Alia looks like a ray of sunshine in yellow separates as she soaks up the sun on a beach. 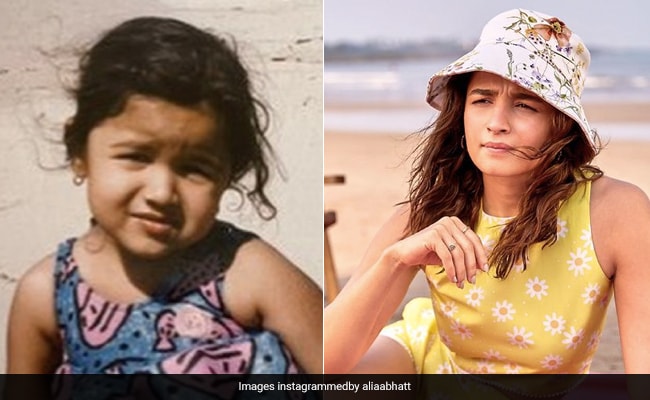 Alia Bhatt has always been a beach baby - quite literally. The 28-year-old actress shared a then-and-now post on Instagram, comprising a throwback and photo of the Alia we know today. The common factor in both photos - the actress and her love for the beach. In the first photo, Alia looks like a ray of sunshine in yellow separates as she soaks up the sun on a beach. The sea, the armchair, the basket and the beach towel give of major picnic vibes. Swipe left on Alia's post and you chance upon an adorable throwback memory of Alia as a little kid, spotted yet again on the beach. "Because no matter who we are..." Alia captioned her post with the sunshine emoji.

Needless to say Alia's Instagram fell in love with her post, flooding her feed with comments. Ranbir Kapoor's sister Riddhima reacted to Alia's post with a bunch of red hearts while Alia's mother Soni Razdan commented: "Aww, baby." Jacqueline Fernandez also posted an "Aww" while Alia's bestie Aakansha Ranjan Kapoor shared the amazed emoji. Tahira Kashyap was one of the first ones to post a red heart.

Alia Bhatt is a true blue water baby, glimpses of which we often find on her Instagram. Here's when she felt like a mermaid in a pool and had the "best day" of her life.

During her Maldives vacay, Alia Bhatt filled up her Instagram with stunning glimpses such as these:

In terms of work, In terms of work, Alia Bhatt co-stars with Ranbir Kapoor in Ayan Mukerji's upcoming movie Brahmastra. Her line-up of films also includes SS Rajamouli's much talked about RRR, in which she works with Ram Charan, Jr NTR and Ajay Devgn. RRR marks Alia Bhatt's south cinema debut. Meanwhile, Sanjay Leela Bhansali's Gangubai Kathiawadi casts Alia Bhatt as a mafia queen. The film is expected to open in cinemas on July 30 this year.