Another day, another post from Alia Bhatt's Maldives diaries 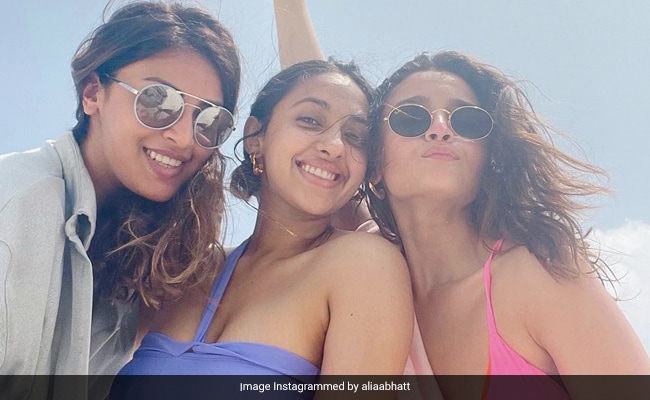 Remember when Alia Bhatt said that she wants to go on a vacation but not solo? Well, she did exactly that and went on a holiday with her besties Akansha Ranjan Kapoor, Anushka Ranjan and her sister Shaheen Bhatt. The destination is Maldives. Alia Bhatt has been delighting her Instafam with stunning pictures from her holiday - one post a day. On Tuesday, the Raazi actress shared a stunning picture. Alia looks pretty as ever in a pink bikini as she smiles with all her heart along with her besties. Alia Bhatt summed up her holiday mood in her caption with these words: "Heal, learn, grow, love."

Meanwhile, Shaheen Bhatt shared a happy picture with her sister as they pose together with the blue waters of Maldives in the backdrop. See the picture shared by Shaheen:

Alia Bhatt has a busy schedule this year, with several film releases lined up. Her upcoming projects include Ayan Mukerji's fantasy trilogy Brahmastra, co-starring boyfriend Ranbir Kapoor and Amitabh Bachchan, and SS Rajamouli's RRR with Ram Charan, Jr NTR and Ajay Devgn. She will also be seen in Gangubai Kathiawadi, which will be directed by Sanjay Leela Bhansali. Her first project with the filmmaker.