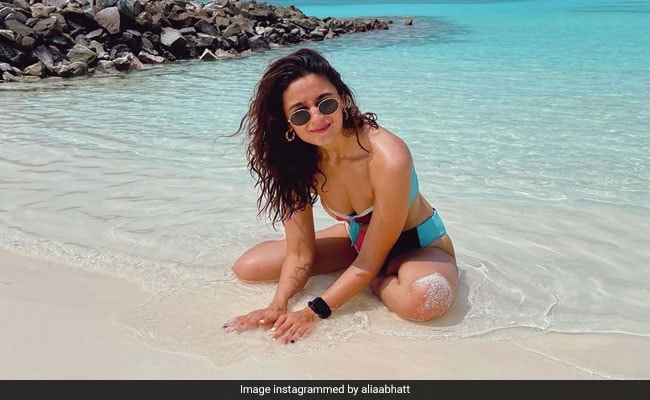 Hello there, Alia Bhatt! The actress, who is currently on a vacation, shared a stunning set of photographs on her Instagram profile on Sunday morning. In the pictures, Alia Bhatt can be seen chilling at a beach destination. In one of the picture, she can be seen in printed swimwear as she happily poses for the camera. Alia accessorised her look with a pair of black sunglasses. In another shot, the actress, dressed in white swimsuit, can be seen making the most of her me time. Alia Bhatt didn't reveal where the picture was clicked but we simply love it. She captioned the post: "Blue seas and a Pisces ( Alia Bhatt's zodiac sign)." Within no time, fans of Alia Bhatt flooded her post with heart emojis.

During an Ask Me Session On Instagram, a few days ago, when a fan asked if she wants to go on a solo vacation, Alia said: "True but not solo."

The actress' upcoming projects include Ayan Mukerji's fantasy trilogy Brahmastra, co-starring Ranbir Kapoor and Amitabh Bachchan, and SS Rajamouli's RRR with Ram Charan, Jr NTR and Ajay Devgn. She will also be seen in Gangubai Kathiawadi, which will be directed by Sanjay Leela Bhansali.