Priyanka Chopra says her Baywatch character, Victoria Leeds, hates what the film stands for - "the spirit of camaraderie, of team work, of actually working together" 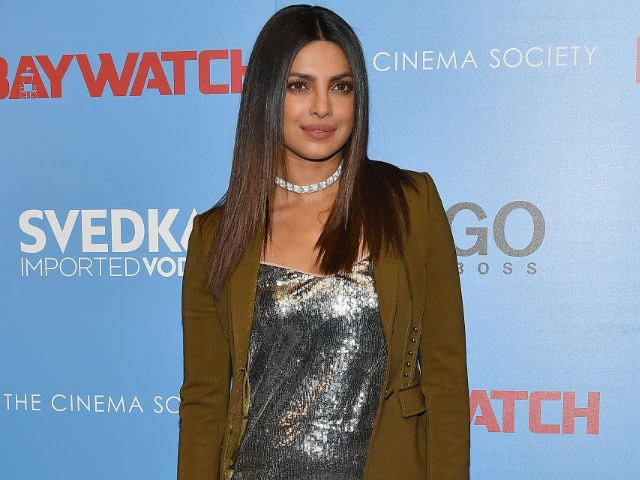 Priyanka Chopra at the screening of Baywatch in New York. (Image courtesy: AFP)

Los Angeles: For a generation of fans, Baywatch was an escapist fantasy that invoked sun, surf and some famously silicone-enhanced stars jogging slo-mo in form-fitting red lycra across the beaches of California. It drew in a weekly 1.1 billion viewers from 148 countries at its 1990s peak, offering sun without sunburn, golden sand without sandy sandwiches and David Hasselhoff without the hassle. A new movie starring Dwayne Johnson hits theaters on Friday, promising a raunchier Baywatch that will succeed where many TV to big screen conversions like The Dukes of Hazzard, CHiPs and Lost in Space have failed.

Dwayne Johnson, who executive produced, and director Seth Gordon (Horrible Bosses) insisted on aiming for an R-rating rather than the more family-friendly PG13, because they didn't want to rein in the edgy humor, strong language and nudity.

The jokes are dirtier, the white-knuckle stunts are more intense and there's more flesh on show, although - from the lingering shots of Zac Efron's toned torso to a cringeworthy scene in a mortuary - much of it is male. The movie follows devoted, overzealous, lifeguard Mitch Buchannon - Johnson taking over from the role made famous on TV by Hasselhoff -- as he butts heads with a brash new recruit (Zac Efron) while investigating a drug smuggling ring.

Alexandra Daddario, 31, who plays rookie lifeguard Summer Quinn, remembers expecting that the shoot in Florida and Georgia would mostly involve going to "look at hot chicks and hot guys and hang out on the beach all day."

"You can't eat a hamburger, you have to eat light, you have to keep your stomach sucked in the whole time," she added.

Already a global star, Priyanka Chopra makes her US debut as the villain of the piece, ruthless businesswoman Victoria Leeds - a part originally written for a man.

"I think the spirit of Baywatch is really the fact that you do something which is bigger than yourself," Priyanka, 34, told AFP.

Promoted
Listen to the latest songs, only on JioSaavn.com
"You're saving people's lives in an ocean which can consume you completely. And that's the spirit of camaraderie, of team work, of actually working together, which is what Victoria hates. But I think that's the spirit of Baywatch."

The Matrix Resurrections : How Priyanka Chopra's 16-Year-Old Self Helped Her Film A Scene