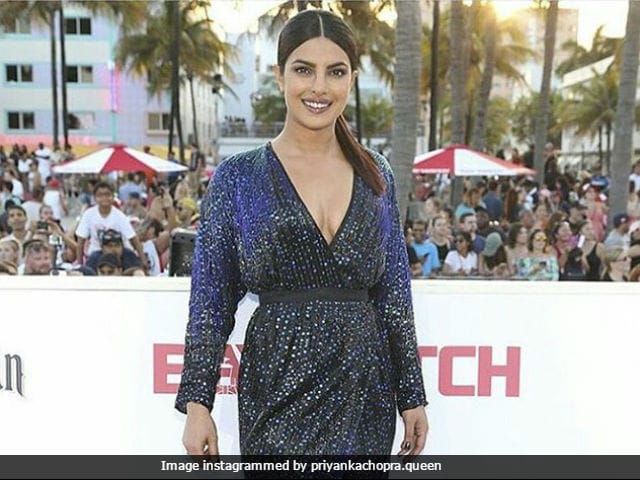 New Delhi: Actress Priyanka Chopra is in Miami to promote her Hollywood debut film Baywatch starring Dwayne 'The Rock' Johnson. The 34-year-old actress has been keeping her fans updated on all the happenings at the Miami premiere of the movie. Priyanka Chopra shared some pictures and a video along with the cast of the movie on social media. In the video shared by the Dil Dhadakne Do actress, fans can be seen cheering for her during the premiere of the film. Priyanka Chopra, who looks absolutely gorgeous in a navy blue sequin dress, captioned the video as: "Thank you for the love Miami! @baywatchmovie premiering on May 25th in a theater near you! #BeBaywatch (sic)."Baywatch, directed by Seth Gordon, is scheduled to release on May 25. The film will hit the Indian theatres on June 2.

Thank you for the love Miami! @baywatchmovie premiering on May 25th in a theater near you! #BeBaywatch

Ahead of the film's premiere, Priyanka Chopra was spotted soaking up the sun and chilling on the beach along with model Adriana Lima. Several pictures of the Barfi! actress were shared on social media by her fan clubs.

See the pictures that went viral on the Internet here:

Priyanka and Adriana Lima in Miami, her hair #priyankachopra #adrianalima

sHE LOOKS STUNNING EVEN IN CAndids HOw ,#priyankachopra #baywatch #miami

Baywatch is based on popular nineties television series of the same name. Priyanka Chopra will be seen portraying the role of the main antagonist, Victoria Leeds in the film.

Priyanka Chopra returned to India a few weeks back after wrapping shoot for the second season of American TV show Quantico.

Promoted
Listen to the latest songs, only on JioSaavn.com
Earlier this month, Priyanka Chopra made her debut appearance on the red carpet of Met Gala 2017 in New York. She has also made several appearances on foreign red carpet like the Golden Globes, Oscars and the Emmys.

Priyanka Chopra's last Bollywood venture was Jai Gangaajal, directed by Prakash Jha. As per reports, she will next be seen in the biopic of late astronaut Kalpana Chawla.