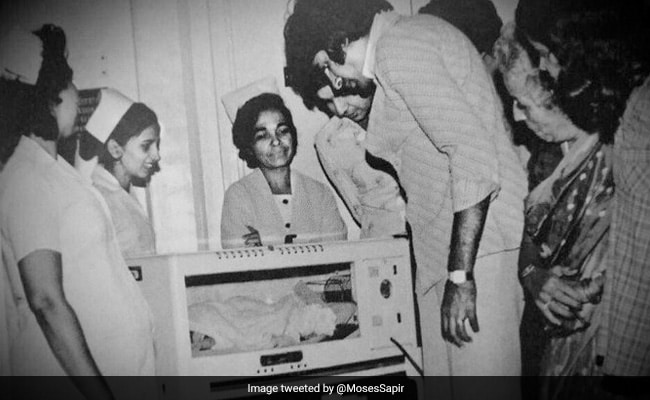 Our Wednesday couldn't get any better as we chanced upon a million-dollar throwback picture of Amitabh Bachchan and his actor son Abhishek. The photograph, from the Seventies, has been shared by a fan on the occasion of Basant Panchami today - Abhishek's birthday on February 5, 1976 coincided with Basant Panchami that year. Abhishek will turn 44 in February this year. The throwback picture is special for many reasons. In case you are wondering how, first, it shows Big B adorably looking at his newborn son Abhishek in a hospital and second, it also features Amitabh Bachchan's mother Teji Bachchan. In the black-and-white photo, little Abhishek can be seen resting in an incubator with Big B, Teji Bachchan and other hospital staff standing around him.

Big B also wished his fans on Basant Panchami and shared this:

they give me company on my desk as I write .. pic.twitter.com/NsQWJXz4lS

Amitabh Bachchan married actress Jaya Bhaduri in the year 1973 after the release of Zanjeer, in which he co-starred with her. The couple welcomed their first child Shweta Bachchan Nanda in 1974 and Abhishek in 1976. The Manmarziyaan actor is married to actress Aishwarya Rai Bachchan.

On the work front, Abhishek Bachchan has a couple of films in the pipeline - Anurag Basu's Ludo, Kookie Gulati's The Big Bull and Diya Annapurna Ghosh's Bob Biswas.