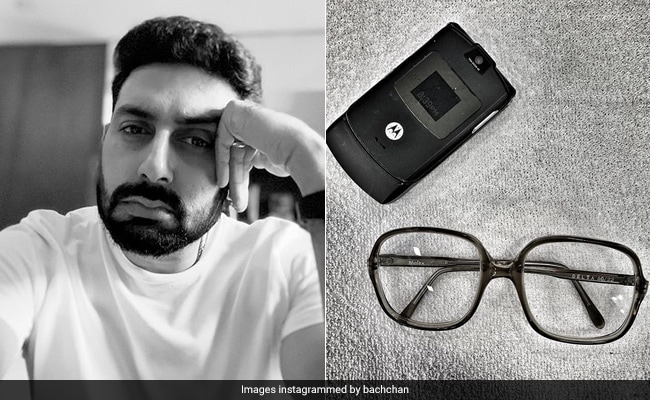 Nomoshkar, ek minute. Bob Biswas is back. In Kolkata. Abhishek Bachchan just told us. For the uninitiated, Abhishek Bachchan stars as Bob Biswas in a standalone film. The titular character is a cold-blooded contract killer, a character that was introduced in Sujoy Ghosh's crime thriller Kahaani. The 43-year-old actor just announced on social media that he's begun shooting for the movie Bob Biswas in Kolkata. Sharing a photo of thick, square framed glasses and a worn-out Motorola phone, signature Bob Biswas accessories, Abhishek Bachchan wrote: "Nomoshkar." In Kahaani, Bob Biswas would always greet his targets with a "Nomoshkar, ek minute", before fishing out a gun from his office bag and shooting them.

Looks like Abhishek Bachchan aka Bob Biswas is already on his first assignment.

Bob Biswas is being produced by Shah Rukh Khan's Red Chillies Entertainment. Earlier in November, Abhishek Bachchan announced the film, writing in a tweet: "Excited to announce my next film, Bob Biswas. Can't wait to get started... Working with many favourites." While Shah Rukh had to be humorous about it as he referred to the nature of Bob Biswas' job and wrote: "Bob Biswas is coming to 'kill it!' Happy to associate with Bound Script Production (owned by Sujoy Ghosh) to bring Bob Biswas, played by Abhishek Bachchan and directed by Diya Annapurna Ghosh (Sujoy Ghosh's daughter)."

2012 film Kahaani starred Vidya Balan as the protagonist, Parambrata Chatterjee as a naive cop and Indraneil Sengupta as the villain. Vidya Balan returned in Kahaani 2 but with a different story-line.

On the work front, Abhishek Bachchan also has films such as The Big Bull and Ludo.