Bappi Lahiri is survived by his wife, son Bappa and daughter Rema 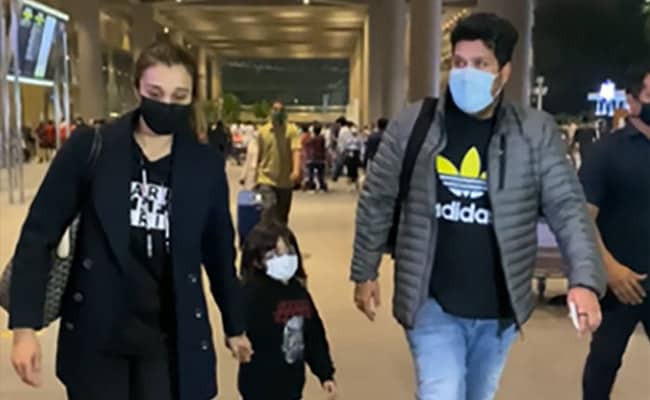 Bappa Lahiri with family at the Mumbai airport.

Late composer-singer Bappi Lahiri's son Bappa flew to Mumbai from the US along with his family for the last rites of his father on Thursday. Bappi Lahiri, who had been in hospital for a month, where he was being treated for multiple health issues, died of sleep apnea on Tuesday night, news agency PTI reported. The composer-singer is survived by his wife, son Bappa and daughter Rema. The composer is being cremated today. A statement from Bappi Lahiri's family read, "It's a deeply sad moment for us. Our beloved Bappi Da has left for heavenly abode last midnight. The cremation will take on arrival of Bappa From LA tomorrow mid-morning. We are seeking love and blessings for his soul."

Here's a video of Bappa Lahiri with his family at the airport:

Bappi Lahiri and his son Bappa collaborated on the soundtrack of 2013 Telugu film Action 3D.

Bappi Lahiri  was best-known for delivering popular songs in several films of the late 1970s-80s like Chalte Chalte, Disco Dancer, and Sharaabi, to name a few. His last Bollywood song was titled Bhankas was for the 2020 film Baaghi 3, starring Tiger Shroff and Shraddha Kapoor. The veteran singer also made an appearance during an episode of the last season of the TV reality show Bigg Boss 15, where he arrived as a guest along with his grandson Swastik ( son of Rema and Govind Bansal).

In the recent years, Bappi Lahiri sang tracks like Bambai Nagariya from Taxi No 9211 (2006), Ooh La La from The Dirty Picture (2011) and Tune Maari Entriyaan from 2014 film Gunday. Other than Hindi cinema, Bappi Lahiri also gave music for films in Bengali, Telugu, Tamil, Kannada and Gujarati cinema. His last Bollywood song titled Bhankas was for the 2020 film Baaghi 3.