"Miss You So Much Daadu," Bappi Lahiri's Grandson Swastik Writes In Tribute

Bappi Lahiri's last onscreen appearance was with his grandson A throwback of Bappi Lahiri with grandson. (courtesy: regobofficial)

Bappi Lahiri's grandson Swastik (Rema and Govind Bansal's son), 12, posted a eulogy for the composer-singer on his Instagram story on Wednesday. Bappi Lahiri had been in hospital for a month, where he was being treated for multiple health issues and he died of sleep apnea, news agency PTI reported. He is survived by his wife, son Bappa and daughter Rema. The composer will be cremated tomorrow after the arrival of son Bappa from USA. "It's a deeply sad moment for us. Our beloved Bappi Da has left for heavenly abode last midnight. The cremation will take on arrival of Bappa From LA tomorrow mid-morning. We are seeking love and blessings for his soul," a statement from his family read.

Meanwhile, Swastik posted a throwback picture of his grandfather on his unverified Instagram handle. He wrote: "Miss you so much dadu. Rest in peace. Love you."

This is what Swastik posted for his grandfather: 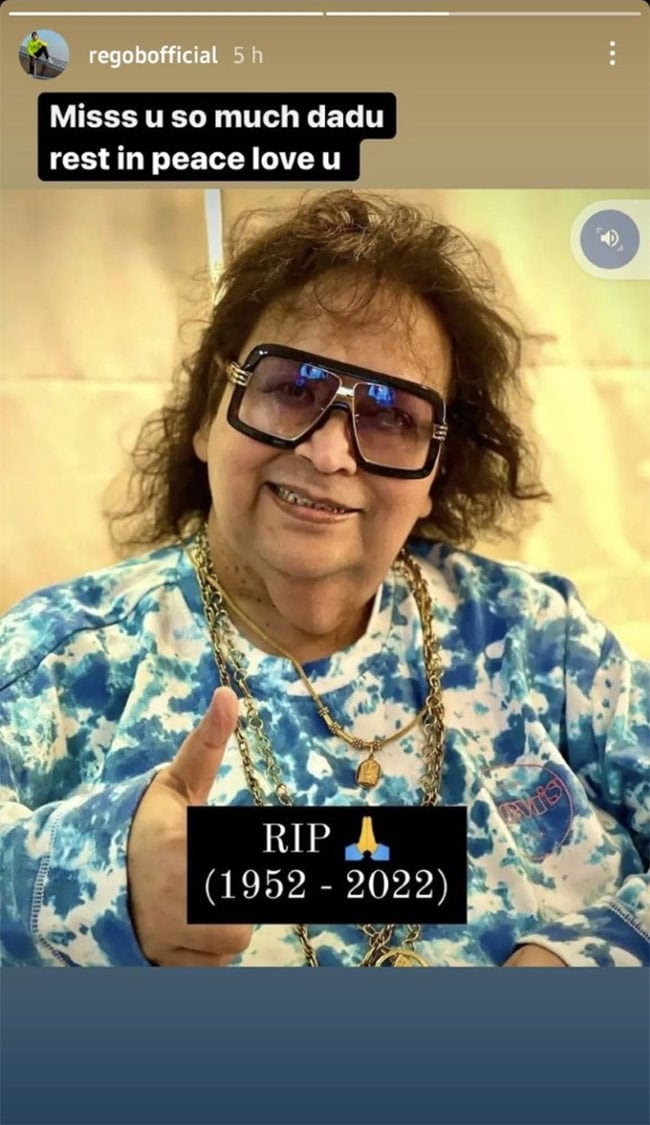 Bappi Lahiri's last on-screen appearance was with his grandson. The veteran singer appeared during an episode of Bigg Boss 15, where he promoted his grandson's song Bachcha Party.

Here's a clip from the aforementioned episode:

Bappi Da, as he was called fondly by fans, was best-known for his hit tracks such as I Am A Disco Dancer, Raat Baaki, Pag Ghoongroo, Bambai Se Aaya Mera Dost, Naino Main Sapna, TaakiTaaki, Humko Aaj Kal Hain Intezaar, to name a few.

His last Bollywood song was titled Bhankas, from the 2020 film Baaghi 3. In the recent years, Bappi Lahiri sang tracks like Bambai Nagariya from Taxi No 9211 (2006), Ooh La La from The Dirty Picture (2011) and Tune Maari Entriyaan from 2014 film Gunday.