Brad Pitt wants to name his BAFTA Award after Prince Harry. Here's why 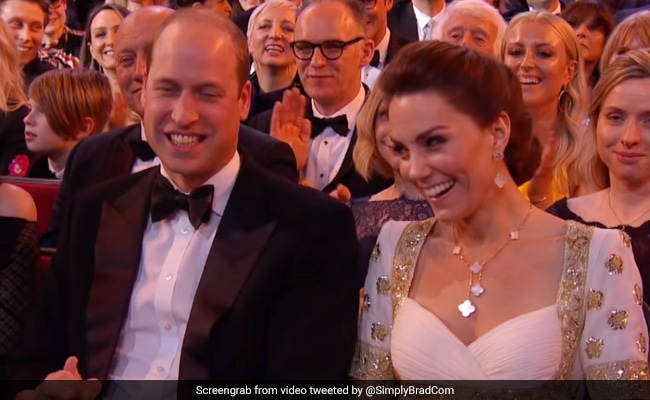 Once upon a time in Hollywood, this happened - Brad Pitt included a joke about Prince Harry quitting his role as a royal in his BAFTA acceptance speech and those who chuckled in the audience included Prince William and Kate Middleton. All thanks to Brad Pitt's Once Upon A Time In Hollywood co-star Margot Robbie, who read out the actor's acceptance speech as he couldn't make it to the BAFTA Awards due to "family obligations". Brad Pitt won the Best Supporting Actor BAFTA for his performance in Quentin Tarantino's Once Upon A Time In Hollywood. Brad Pitt won in the same category at the Golden Globes held earlier.

Brad Pitt, who cracked a joke about his "dating" life at the Golden Globes, began his acceptance speech by writing (as read out by Margot Robbie): "Hi Britain, heard you just became single. Welcome to the club. Wishing you the best with the divorce settlement... blah blah blah." That was Brad Pitt's not-so-subtle dig at his failed marriages and UK's exit from European Union as Brexit came into force recently. Brad Pitt and Jennifer Aniston divorced in 2005. Brad Pitt later married Angelina Jolie in 2014 and they separated in 2016.

Switching to a more formal tone, Margot Robbie continued to read out Brad Pitt's acceptance speech: "Thank you to the academy for this extreme honour." Referring to Brad Pitt, Margot added: "He's always been intimidated to be over here given the royal academy of dramatic arts and the titans that have come before. So this is especially meaningful." The next few seconds of the speech were about thanking the producers, the stunt team, and the "one and only Quentin Tarantino."

Adding oodles of hilarity to the speech, Margot Robbie said: "He goes on by thanking you again and blah blah blah blah blah... it's a bit much really." Holding up Brad Pitt's BAFTA Award, Margot Robbi says: "Oh, and he says that he is gonna name this Harry cuz he is really excited about bringing it back to the States with him. His words, not mine, thanks." LOL. For the uninitiated, the joke was directed at Prince Harry and Meghan Markle's decision to spend more time in North America after taking a step back from their duties as British royals.

Here's how Margot Robbie made Brad Pitt's BAFTA 2020 speech all the more interesting:

Brad Pitt's full speech at the BAFTA's given by Margot Robbie pic.twitter.com/H77zlRla8d