The White Tiger featured in seven categories on BAFTA longlist 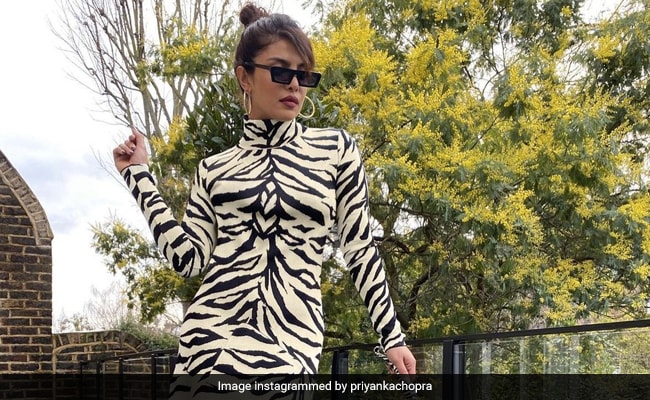 Priyanka Chopra in a still from The White Tiger (courtesy priyankachopra)

Priyanka Chopra is indeed on cloud nine, courtesy The White Tiger. The Ramin Bahrani directed movie, which arrived on Netflix recently, featured on the freshly released longlist of the British Academy of Film and Television Arts (BAFTA). The White Tiger made it to seven categories on the BAFTA longlist, which includes Best Actor for Adarsh Gourav, Best Supporting Actress for Priyanka Chopra, Best Director for Ramin Bahrani and Best Film. On the BAFTA longlist, The White Tiger was also included in the list of movies for Best Adapted Screenplay, Best Cinematography and Editing. Celebrating the big feat on Instagram, Priyanka couldn't contain her excitement and cheered for the film's team. Sharing a glimpse of the BAFTA longlist, Priyanka wrote in an Instagram story: "Wow, all the feels for our beautiful film." 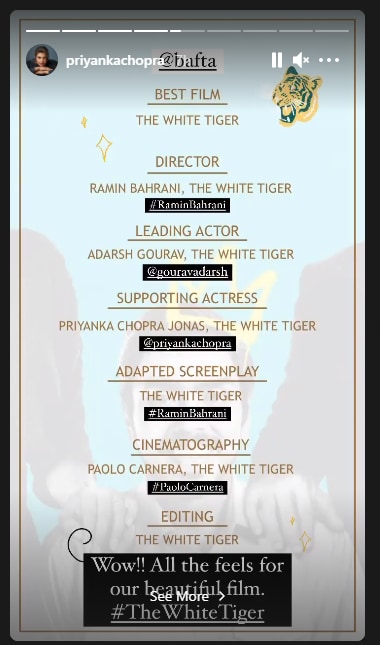 The big news was shared by Priyanka's sister, actress Parineeti Chopra first, who tweeted on Thursday evening: "Ladies and gentlemen MEET MY BAFTA LONGLIST SISTER! Can't wait for this to happen!" Priyanka acknowledged the shout-out with the finger's crossed emoji, hoping that The White Tiger eventually makes it to the BAFTA nominations.

In The White Tiger, Priyanka Chopra co-stars with Rajkummar and Adarsh Gourav, who plays the protagonist. As the title suggests, the film is based on Aravind Adiga's Man Booker Prize-winning debut novel The White Tiger. According to the novel's plotline, the film follows the story of an ambitious chaiwala Balram Halwai, whose self-made journey takes him to the pinnacle of success as a big shot entrepreneur. But the plot of the story is laden with murder and deceit.

After a few rounds of voting, the final list of BAFTA nominations will be announced on March 9, a week after the Golden Globes will kick off Hollywood's award season for this year. The BAFTA Awards will take place on April 11, after being postponed because of to the COVID-19 pandemic. Meanwhile, the Oscars are scheduled for April 25.