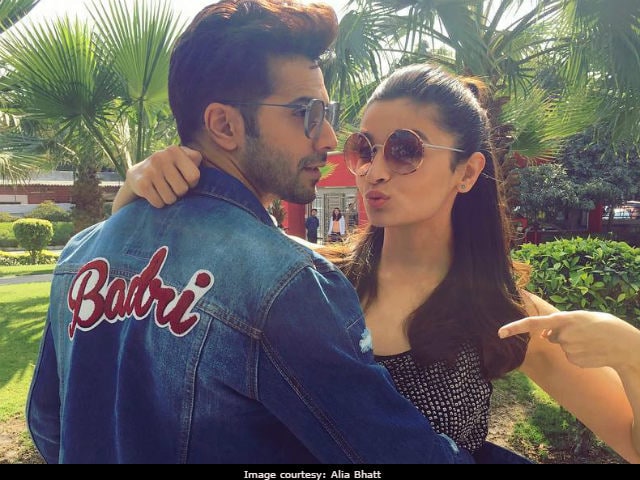 New Delhi: Badrinath arrived in Delhi with his baraat and dulhania on Wednesday. Badrinath Ki Dulhania co-stars Varun Dhawan and Alia Bhatt received a very Bollywood-ish welcome as they arrived at a particular venue in the National capital to promote their upcoming film. There was band, baja, baraat and everything shaadi-like as the duo drove down in their car. Varun and Alia's fans danced around their car as it entered the driveway. Meanwhile, the musicians set the celebratory mood a notch higher with the song Chumma Chumma De De. Varun Dhawan and Alia Bhatt's Badhinath Ki Dulhania is all set to hit screens on March 10.

Alia looked cute as a button in a printed top and lose denims. Varun escorted Alia out of the car as fans went berserk in their attempt to catch a glimpse of the stars. Varun and Alia did not seem to mind at all. Here's Badrinath Ka Baraat:

Alia and Varun could not (of course) resist a visit to the India Gate. Badrinath Ki Dulhania has been extensively shot in Delhi and there's a similar poster of the two, in which they feature together with the India Gate in the backdrop.

It's all about style for Badrinath:

Promoted
Listen to the latest songs, only on JioSaavn.com
Badrinath Ki Dulhania marks Varun Dhawan and Alia Bhatt's third collaboration after 2014's Humpty Sharma Ki Dulhania and 2012's Student Of The Year, which was also their debut film. Badrinath Ki Dulhania is actually a sequel to Alia and Varun's 2014 wedding drama.