Back Where It All Began: Priyanka Chopra, 19, In A Pic From Her First Ever Song Recording

Composer D Imman recently shared a glimpse of Priyanka Chopra from the recording of the song Ullathai Killathe, from twenty years ago. 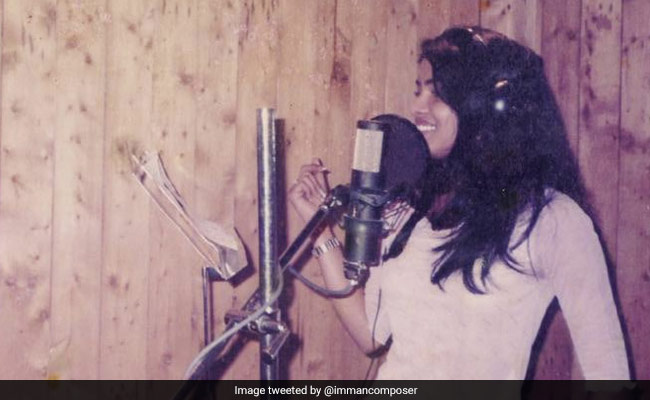 Did you know Priyanka Chopra's first film Thamizhan also marked her singing debut? Priyanka Chopra stepped into films with 2002 movie Thamizhan, for which she also sang the number Ullathai Killathe, marking her first stint at playback singing. Word has it that Priyanka's co-star Vijay heard her humming on the sets of the film and insisted that Priyanka contribute to the film's soundtrack. The playlist of Thamizhan also marked the debut of composer D Imman - both Priyanka and D Imman were all of 19 at that time. The composer recently shared a glimpse of Priyanka Chopra from the recording of the song Ullathai Killathe, from twenty years ago.

"Nostalgic Pic! Easily before two decades! A rare click during the recording session of my debut film, Vijay Anna starrer Thamizhan and it is Priyanka Chopra's debut song as a singer Ullathai Killathey," D Imman captioned the photo.

Nostalgic Pic!
Easily before two decades!
A Rare click during the recording session of my Debut Film @actorvijay anna starrer #Thamizhan And it is! @priyankachopra 's debut song as a singer❤️👍 #UllathaiKillatheypic.twitter.com/M3q2eSch3W

In several Instagram posts and even in her memoir titled Unfinished, Priyanka Chopra wrote about her father Ashok Chopra being the main influence behind her love for music. She lost her father to cancer in 2013:

In 2005, Priyanka Chopra recorded a song for the film Bluffmaster! but it never made it to the film's playlist. She made her playback singing debut in Bollywood years later with the song Chaoro in Mary Kom. Priyanka Chopra has three singles to her credit - In My City, featuring rapper will.i.am, Exotic, featuring Pitbull and a cover of Bonnie Raitt's I Can't Make You Love Me. In 2015, Priyanka Chopra sang the title song of Dil Dhadakne Do along with Farhan Akhtar. Priyanka Chopra is married to singer Nick Jonas.