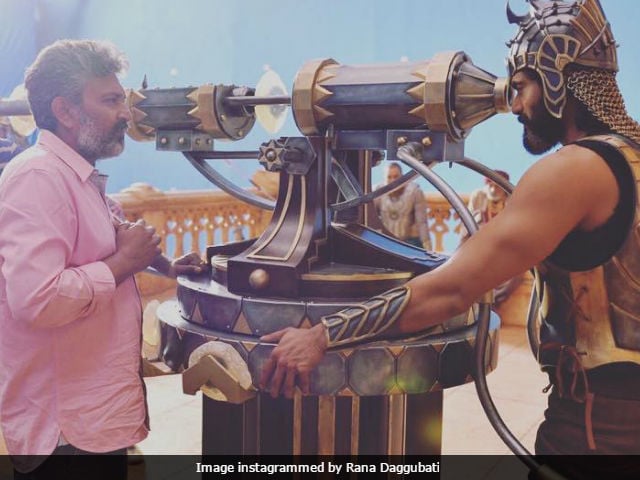 Rana Dagubbati and Rajamouli on the sets of Baahubali: The Conclusion. (Image courtesy: Rana Daggubati)

New Delhi: Baahubali: The Conclusion is less than two weeks from release and the Internet cannot keep calm. Pictures from the film's sets are now doing being circulated on the social media - in some director SS Rajamouli is going through scenes with Prabhas, Anushka Shetty and Rana Daggubati in another actress Ramya Krishnan is laughing with the crew members. Prabhas plays titular Baahubali while Rana Daggubati plays his nemesis Bhallala Deva. Anushka Shetty plays Devasena and Ramya Krishnan will be seen as Sivagami. Baahubali: The Conclusion is the second of the two-part series by Rajamouli. The first part released in 2015, the concluding segment will hit the screens on April 28.

Here are pics from the sets of Baahubali: The Conclusion.

This one's from a run through of the scene with Prabhas and Anushka Shetty before Rajamouli said: "Action." Devasena is Amarendra Baahubali's wife, who was chained after her husband's death. Her son Mahendra Baahubali (also played by Prabhas) successfully rescues her in the first film.

A run through of the scene with #Prabhas and #Anushka before S S Rajamouli says "Action"! #Baahubali2

Rana Daggubati shared this picture and wrote: "Blessed to be in the esteemed company of these fine men!! (sic)" Rana Daggubati's character usurped the throne of Mahisthmathi and will now fight his nephew to keep a hold of the throne.

Blessed to be in the esteemed company of these fine men!! #BaahubaliTheConclusion #JoyofWorkingincinema

In this picture, Ramya Krishnan is busy chatting with the crew members. She plays Sivagami, who is Bhallala Deva's mother and Baahubali's foster mother. She governed Mahishmathi till the time Amarendra Baahubali took the throne. She later saved his son by sacrificing herself.

Joke is on us for not being part of this girl gang.. #Baahubali2

In this picture Rajamouli can be seen working out the details of the film.

Careful, precise planning are the building blocks of a magnum opus! #Baahubali2

The film will release in Telugu, Tamil and Hindi on April 28.