Here's how Tiger Shroff described the trailer on Twitter: "The rebel is back and this time he's up against a nation to fight his greatest battle!" 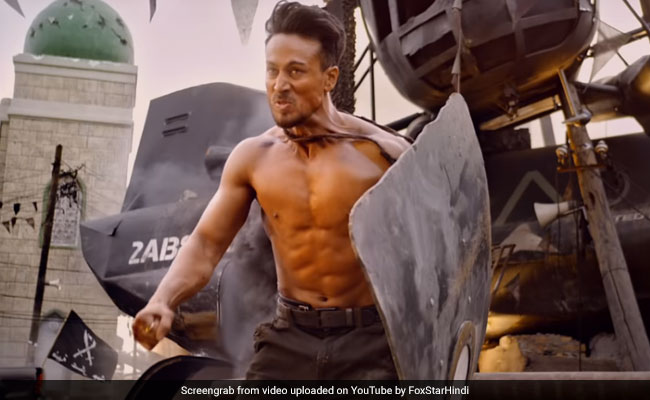 Baaghi 3 trailer: Tiger Shroff in a still from the film (courtesy YouTube)

The wait is over for Baaghi 3 trailer, which is all about Tiger Shroff, guns and muscles. The Baaghi 3 trailer introduces the story-line of the film for the first time. The trailer reveals that Baaghi 3 deviates from the theme of revenge love stories of the previous Baaghi films, with the spotlight on Riteish Deshmukh. While Tiger returns as the feisty but otherwise peaceful Ronnie, Baaghi 3 casts Riteish as his naive and simple brother Vikram, who is a cop. In Baaghi 3 trailer, Ronnie is on a self-appointed mission to rescue his brother Vikram, held hostage by a terrorist group in Syria. Shraddha Kapoor plays Ronnie's love interest Siya, who accompanies him to Syria on his mission.

The Baaghi 3 trailer begins with Ronnie saying a rather dramatic dialogue: "People cross limits in relationships. I had one such relationship for which I crossed borders." The trailer then switches to happy glimpses of Ronnie and Vikram's bond as brothers. But soon, Vikram has to take a flight to Syria for some "paper work". When on a video call with Ronnie from Syria, Vikram gets beaten up by goons and kidnapped by terrorists. Ronnie threatens the kidnappers that he will find them and kill them if anything happens to Vikram.

Next thing we know is that Ronnie is in Syria, blowing up cars and buildings and making helicopters crash in search of Abu Jalal Gaza, leader of the terrorist group. The Baaghi 3 trailer also features Jaideep Ahlawat and Vijay Varma in blink and miss appearances.

Here's how Tiger Shroff described the trailer on Twitter: "The rebel is back and this time he's up against a nation to fight his greatest battle! Catch the explosive Baaghi 3 trailer." Watch the trailer here:

Directed by Ahmed Khan and produced by Sajid Nadiadwala, Baaghi 3 will blow up your screens on March 6.