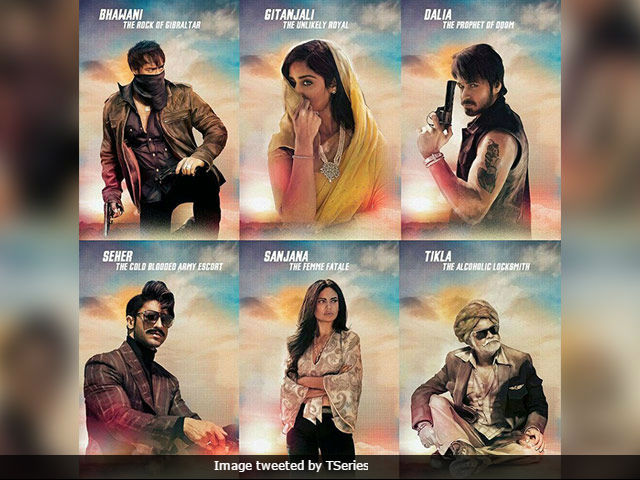 New Delhi: Baadshaho, starring Ajay Devgn, Ileana D'Cruz, Emraan Hashmi, Vidyut Jammwal, Esha Gupta and Sanjay Mishra, is all set to release in theatres on September 1. Ahead of the film's release, the actors shared posters of the film on social media. The posters which are in the form of sketches highlight their respective characters in the film. The actors shared the poster with the same caption that read, "10 Days To BAADSHAHO." Baadshaho, which has been directed by Milan Luthria, is set against the backdrop of 1975 Emergency. In the film, Ajay Devgn features as Bhawani, a gangster and Ileana will feature as Gitanjali, a princess.

The trailer of Baadshaho was unveiled by the makers of the film on August 7. The two-and-a-half minute trailer shows how princess Gitanjali (Ileana D'Cruz) decides to fight for her wealth which is being returned to the government and she seeks help of Bhawani (Ajay). Bhawani then plans to hijack a truck that is heading towards Delhi with baskets of gold biscuits packed inside it along with Dalia (Emraan Hashmi), Sanjana (Esha Gupta), Tikla (Sanjay Mishra) and Seher (Vidyut Jammwal).

Watch the trailer of Baadshaho here:


Baadshaho has been co-produced by Bhushan Kumar, Krishan Kumar and Milan Luthria. The film has been extensively shot in Mumbai and Rajasthan.

The film marks Ajay Devgn's fourth collaboration with director Milan Luthria, after Kachche Dhaage, Chori Chori and Once Upon a Time in Mumbaai.

Sunny Leone will make a special appearance in the movie.

Baadshaho is slated to release in theatres on September 1.
Comments
BaadshahoAjay DevgnIleana D'Cruz